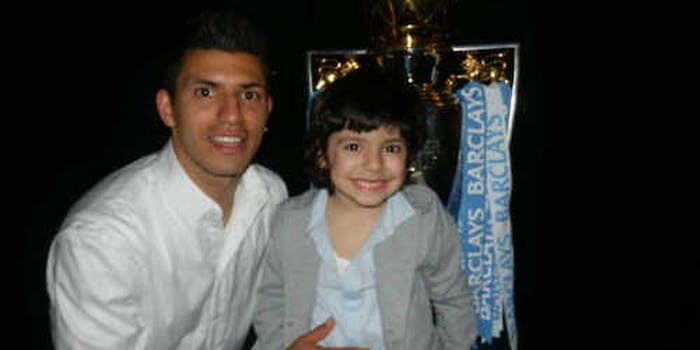 The Daily Dot assembles a top team of Premier League soccer players—based on how interesting they are on Twitter.

No sooner had the London Olympics crossed the finish line than England’s top soccer league made ready for the opening whistle.

Hundreds of players are hoping for glory when the new season begins Saturday, and many of them are on Twitter. They’ll be sharing thoughts and insights as they vie with footballers from 19 other teams to win the title, qualify for European competitions, and avoid dreaded relegation.

Twitter, lest it be forgotten, is a hotbed for disputes between players, fans, referees, and managers. Players have gotten in trouble over apparent racist tweets and advertising, among other offenses. They’ve been the targets of racially charged attacks, too.

In all, the soccer community on Twitter is never dull. You can never quite tell when the next big rumpus will occur, but these 20 players are all well worth your time.

Frimpong found himself in hot water recently, fined for “improper conduct” after a tweet to a Tottenham Hotspur fan. He’s an uncompromising presence in the community, and advises followers to be the same. The 20-year-old has been with Arsenal for over a decade, signing at age 9. He has made 14 appearances to date for the team, and a loan to Wolverhampton Wanderers was cut short due to injury.

“Congrats to Beyonce and Jay-Z on their daughter Ivy Blue. Since she’ll never have to work a day in her life, they should’ve named her Lay-Z.”

The Irishman chose Twitter to announce his retirement from playing for his national team. Former Celtic and Manchester City goalkeeper Given has largely steered clear of controversy over the years, and is an amiable chap on Twitter. He thanks fans, pledges support for countrymen and women in other sports, and generally seems like a top bloke.

We’ll admit it: Luiz makes it onto this list pretty much solely on the basis that he refers to his followers as “geezers.” Brilliant. The Brazilian defender often tweets in his native Portuguese, but don’t let that put you off if you’re not a speaker. Given his enthusiasm and friendly nature, he’s a worthy follow, even if the man needs to that learn not every word needs to be a hashtag.

“This title is for all the Chelsea supporters and football lovers. I only manage to run because I had you all in my heart. Thank you God”

Distin plays in one of the most esteemed sports leagues in the world, but he’s enough of a sports fan to be delighted with a signed LeBron James jersey. The French defender, who has yet to win a trophy with Everton, shared his happiness with fans when he signed a new contract in May.

“One more training session and we fly home. I don’t know how I m still on my feet after all this running. Just thinking about it is painful”

The midfielder is one of the finest players in the league, and has repeatedly shown his class since joining Fulham in 2007—a team he may be looking to leave. Despite his success, Dempsey certainly seems approachable, as he often retweets photos fans took with him. The U.S. national certainly knows how to enjoy his downtime, as a photo of him fishing in between seasons showed.

“Chase the dream until you catch it. And when you do. Put that mothafuga in a headlock and never let it go. Ha”

Perhaps no player created more headlines on the pitch than Luis Suarez last season. After uttering a slur to Manchester United’s Patrice Evra last October, he was banned for eight games. The exciting Uruguayan striker still finished the season as Liverpool’s top league scorer for the year. He’s a fun chap to follow on Twitter too, as he shares candid photos of life as a pro soccer player.

“KENNY thank you very much for all your help and things I learned from you during 1 year and a half! A big hug and good luck!!”

Aguero played a key role in helping his team win its first league championship in 44 years. In the dying seconds of the final game of the season, he scored the goal that snatched the title away from Manchester United.

“Good game and another victory to get us to the game on Sunday. The kick I received? I’m fine, thanks for asking.”

Spats with Piers Morgan, questionable comments about Chelsea defender Ashley Cole, and angry tweets aimed at England’s manager over team selection. Yep, Ferdinand certainly takes the cake when it comes to stirring the hornet’s nest on Twitter. The defender’s just about the closest thing to a troll the Premier League has to offer. Regardless of your opinions about the man, he’s a must-follow.

“I [hate] 2 tell you this @piersmorgan but….I been watching the Goonies again with my lil men…the truffle shuffle is classic, reminds me of u!”

England Under 21 international Ameobi suffered an injury in January which kept him sidelined for much of last season. He was back at training on Monday though isn’t sure he’ll be fully ready to play this weekend. He offers followers a behind-the-scenes glimpse at life in Newcastle, recently sharing a bunch of photos from a team white water rafting trip.

“Forgot what room number I was in after the pre match meal, had to wander round the hotel floor trying each door lol”

Vaughan joined Norwich in May 2011, but only made five league appearances for the club in his debut season there. He’s raring to go now though, and scored three goals in three pre-season games. The 25-year-old occasionally joins in with trending hashtags, most recently sharing memories of his younger days, and was sad to see friend Fabrice Muamba retire from the sport:

“Gutted my friend @fmuamba has retired from football. Such a great player and even better person. good luck bro”

Love him or hate him, Barton is a contentious figure who always has something intriguing to say. The 29-year-old will miss a big chunk of the season after being banned for 12 games over an incident in the final game of the last campaign, meaning he’ll have plenty of time to share his unfiltered thoughts.

“Anythings better than ‘god save our queen’ mainly due to the fact that she doesn’t need saving and ‘gods’ presence is still up for debate!”

—Aug. 1, 2012, in a debate about the Great Britain national anthem during the Olympics

Hunt’s a big, friendly character, and that personality boils over on to Twitter. The Irishman isn’t afraid to ask his followers for help when he needs to. He’ll be making his debut in the league after Reading was promoted last season. Here’s hoping he’ll tweet his way through the experience.

“Yeeeeeeassss!!!! Ohhh my god thank you!!! Champions!! I will see everyone in Reading tonight for a drink!!!! #huntfacts”

—April 21, 2012, after winning the Football League Championship league with his team

Like Hunt, Dickson will be playing in the Premier League for the first time. Also like Hunt, he’s a likeable fella on Twitter, sharing lots of strange-but-true facts. While he was born in England, he’s tweeted his interest in representing Malaysia on the international stage.

The Bosnian goalkeeper played a key role in helping Stoke to a safe 14th place finish last year. He got the season off to a strong start by conceding just one goal in seven games (between club and country), but found himself benched for a long spell after a poor run. He kept his fans up to date during the team’s pre-season games and is happy to donate signed gloves to followers for a good cause.

“Big respect to Michael Phelps, greatest swimmer ever. Unreal what he has accomplished. Lucky to have been able to witness it.”

Attacker Campbell joined Sunderland in 2009, and has struggled to establish himself due to ongoing injury problems. He’s an active Twitter user, sharing bite-sized anecdotes and telling followers about shows he attends. We’re not sure his coach will be too pleased with all the sweet treats he’s gulping down though.

“Delighted to earn my first international cap and the very same moment I became a dad to Isla rose campbell! #cloud9”

It seems like there’s no stopping Dyer once he gets started on Twitter. He tweets back and forth with friends and followers, and is happy to confirm potential sightings of him while driving around town. He plays as a midfielder for Swansea, and scored against top team Arsenal in a match last season.

“Watchin my little cousin play a tournament where a burger chocolate bar and a fizzy drink was ur inbetween game snack! Love those days!”

The striker hit the headlines this week when he scored the winning goal in England’s international friendly game against Italy. On Twitter, he was fairly reserved about the feat, though thanked fans for their messages. He seems a nice chap:

“RIP to Spurs fan that sadly passed away at last night’s game. Condolences to all his family!”

Nigeria international Peter Odemwingie has strong opinions about sports, is frank about bad performances, and speaks his mind on national issues. He’s not a prolific Twitter user, but more often than not has something interesting to say when he shares thoughts with his legions of followers.

“To my dear WBA supporters . I love this club and will leave only to a TOP team which is understandable. Nothing abnormal is going on.”

Like Vaughan, Cole took part in the recent #WhenIWasYounger hashtag to share some amusing, and some opinionated memories from his youth. He’s been on Twitter since November, and in that time, he’s posted more than 1,200 tweets.

“Just watched The Dark Knight Rises! It was #epic ! I see a lot similarities between me and Batman! He’s Tall & Dark! Lolololol!!”

The 32-year-old joined Wigan in 2006 and has proven to be one of the team’s most dependable and versatile players. He’s made four appearances for Barbados, captaining the team in a World Cup qualifying game last year. He’s shared sneak peeks at the team’s pre-season training camp, and recently admitted he was looking forward to a friendly game against Spanish team Celta Vigo.

“Great news Mike Pollitt has agreed a new contract,Apart from being a very good keeper. He has also saved me from being the oldest in team. Ha”

For more Premier League players and official team accounts, check out our Twitter list and tell who you think should be included.