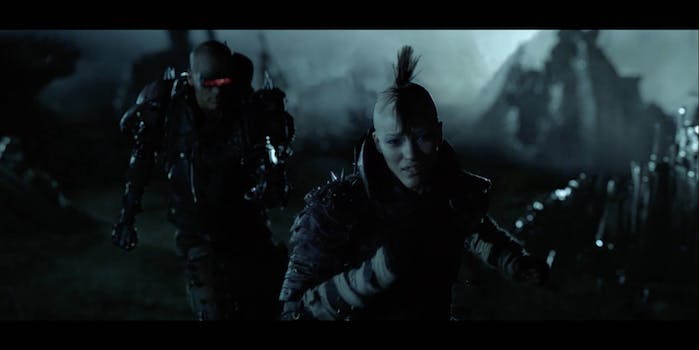 This haunting sci-fi short film is so beautiful, you can’t look away

The first thing you notice about the film Lost Boy, a nine-minute short film, is that the production is gorgeous both visually and aurally.

That’s probably why Lost Boy has been named a Vimeo staff pick, and has picked up major steam this week. In the comments of the short, viewers have lauded the piece for its creativity and grungy, futuristic vision. The intricate details of the characters, realistic scenery, and haunting music all fit tightly in this alternate universe.

The pacing and visuals are so entrancing you can’t look away, even during some of the more disturbing moments.

Directed by Ash Thorp and Anthony Scott Burns as a production of PostPanic Pictures, Lost Boy flourishes in visual cues where it lacks in explicit plot—we see a punk woman running from the human cyborg Lost Boy, but their motives are fairly indecipherable.

According to the website for the short, the film regards the demise of humanity: “This is how they saw the universe: Input and Output. It was this arrogance which led to their demise. The moment they saw their physical domain as nothing more than simple programming, they were doomed.”

View the entire short below:

Though it takes a bit of digging to understand the film’s plot, it does appear the directing team made Lost Boy a commentary on the possibility of everlasting life.

“Without giving away too much… The story came from wanting to show where humanity could be headed in a way we haven’t seen before,” Scott said in the website’s interview about the film. “A beautiful, demented, cautionary tale.”