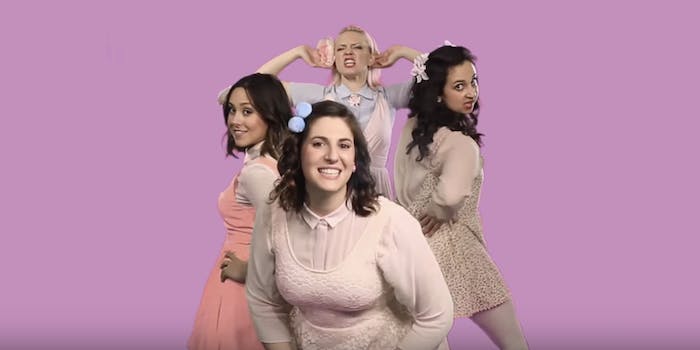 It's all about the laughs, no shaming.

From body-positive yogis on Instagram to plus-size supermodel Tess Holliday rocking the cover of People magazine, body-positive images are on the rise. But it’s no secret that a lot of so-called body-positive messaging actually fails to celebrate all bodies.

Musical sketch comedy team Pop Roulette has created the perfect send-up of body-positive anthems that pit “bigger” bodies against slimmer ones. The video features a Meghan Trainor-esque aesthetic and a catchy pop hook. It perfectly highlights everything that’s silly and absurd about calling slim bodies big and excluding certain body types from the party.

Rachel Wenitsky, who co-authored the video’s lyrics with fellow Pop Roulette member Sudi Green, told the Daily Dot, “We love that there’s starting to be a shift towards a more ‘body positive’ culture—we love women and bodies and positivity—but it’s counterproductive that so much of the media surrounding the movement is actually pretty exclusive to certain body types.

“There’s this idea that a ‘real’ woman looks and acts a certain way, and that just doesn’t seem super helpful. It only adds to the notion that there’s a ‘correct’ way to be a woman.”

And while some takedowns of Meghan Trainor’s “All About That Bass” have been heavy-handed, this video is absurd and light-hearted fun.

Wenitsky explained, “We just wanted to make a video where we could eat pizza and cupcakes and sit in tiny chairs and call it ‘work.’”

For the record, we’re all about that.