Spotting the next generation of YouTube stars at Playlist Live

What does it take to make it on YouTube?

Los Angeles may be the epicenter of YouTube culture, but all eyes were on New Jersey this past weekend as fans, creators, and businesses descended on Secaucus—just a few miles out from New York City—for Playlist Live Tri-State, a spinoff of the flagship convention annually held in Orlando.

It wasn’t the first time fans had the chance to meet their favorite YouTubers—VidCon draws thousands every year in Anaheim, DigiTour goes all over the country (most recently this past summer), and Fullscreen, a multichannel network that represents some of the biggest content creators around, created INTOUR so fans could interact with creators.

As Buffalo cleaned up after a monstrous snowstorm northwest of Playlist Live, New Jersey had its own share of wintry weather, something many of the guests who traveled across the country to attend weren’t used to.

This was most noticeable in the tented garage next to the Meadowlands Exposition Center, where fans waited hours to meet their idols. It’s where Playlist Live put many of the YouTube meetups, but the promise that the garage would be heated didn’t last long—the fire department turned off most of the heat. Fans had to wait in 30-degree weather for the chance to talk to YouTubers like Tyler Oakley, Hannah Hart, and Troye Sivan. 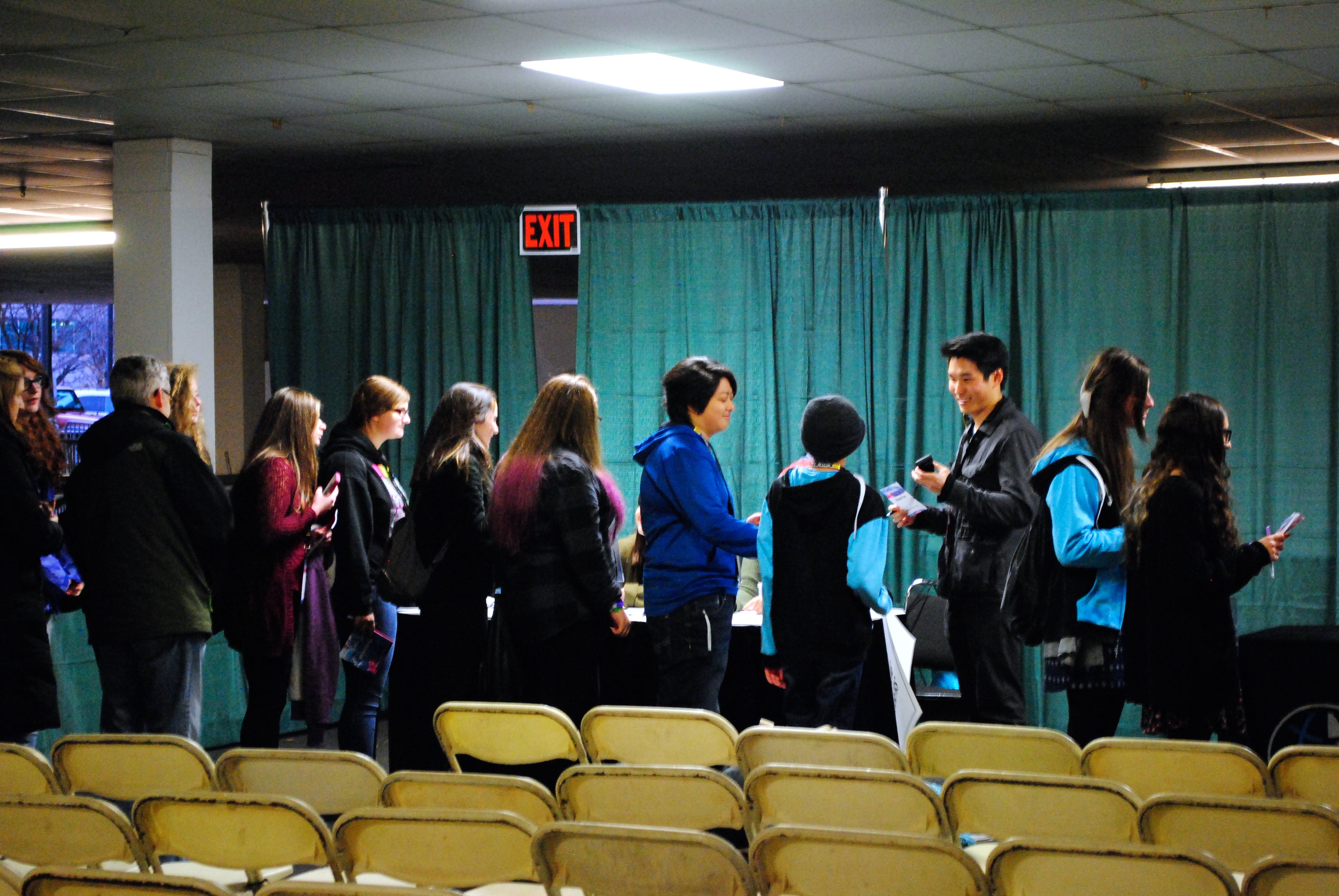 While those creators may not be household names, for many teens, they’re even more popular than traditional celebrities. They’ve joined Beyoncé in a national campaign, they’ve become New York Times bestselling authors, they’ve reached the top of the iTunes charts (and even hit the Billboard charts), and they’re getting on television. Their fans may help them win a reality competition. But many of them also know how they got to where they are today.

With only a space heater more suitable for an office desk to keep the YouTubers warm, they greeted each of their fans with the same enthusiasm as the last. Everyone there may know Hannah Hart’s name and could probably point her out in a crowd, but with every new fan who approached, she put on a smile and said, “Hi, I’m Hannah.”

While YouTube’s bustling industry is centered in Los Angeles, some hubs remain in New York, including a new YouTube Space in Chelsea that opened earlier this month. But if you want to make it as a full-time YouTuber, you should probably move to L.A.

The first day of Playlist Live, as with VidCon, the focus was on the creators who were interested in learning about the industry and how to make it. They could find out the pros and cons of joining an MCN, growing their channel, and how to build that channel into a business from fellow creators who already did it. No matter how much business jargon and chatter they passed on, many of them stressed one thing: it’s still about community.

YouTube is the top social network among teens, Epicsignal’s Brendan Gahan said during his keynote speech, with around 97 percent of them actively watching videos, and many of the creators they watch are getting better numbers than television.

“Being a fan really stands for something,” he added.

Traditional media has often scoffed at YouTube and new media, but just as movie stars transition to television, more celebrities are crossing over to YouTube and Vine. Pitbull is working on multiple webseries with Endemol and meteorologist Al Roker—who moderated “A New Wave of Talent: Working with the Next Generation”—is experimenting with the six-second videos. A recent collaboration with Thomas Sanders, a Vine star who has more than 4.3 million followers, has been looped over 3 million times.

“Everything changes, but yet, at the end of the day, in a sense, it’s still television,” Roker told the Daily Dot. “Whether you’re looking at it on a screen on your phone, or a tablet. And people watch content for people. All these young people out here—they’re like the stars that you used to see growing up, when I saw TV personalities. These are the same people, they’re just on a smaller screen. They don’t need necessarily a traditional television studio or broadcast network to be stars.”

YouTubers are actually the next reality stars, Big Frame’s Lisa Filipelli argued. But instead of having a network edit in drama, the creators control what we see. The creators, along with the people who are only just starting out, have to maneuver a thin line between staying authentic and selling out when they accept endorsements—something that might help creators early in the process make that move to Los Angeles.

Something that’s easier to determine? What not to reveal in a video. Michael Buckley, Hannah Hart, and Olga Kay advised creators not to put every aspect of their lives in videos—and they’re not alone.

“I think there’s a pretty clear line,” Meg DeAngelis said, in regards to what she does and doesn’t put on camera. “I think of [my fans] as friends, so I pretty much share everything, except [if] it has to do with my safety and my address, I’m not gonna share that. But everything else, I’m really, really open about, to be honest.”

It’s easy for people to compare the young teen girls who screamed whenever one of their favorite YouTubers walked by to the fangirls of the ’60s spotting the Beatles. Impromptu YouTube and Vine meetups caused pedestrian traffic jams in the Meadowlands Expo and many of the young (mostly female) fans started to shout whenever they spotted a YouTuber. Unlike VidCon, when it came to the actual lines, things were more organized. 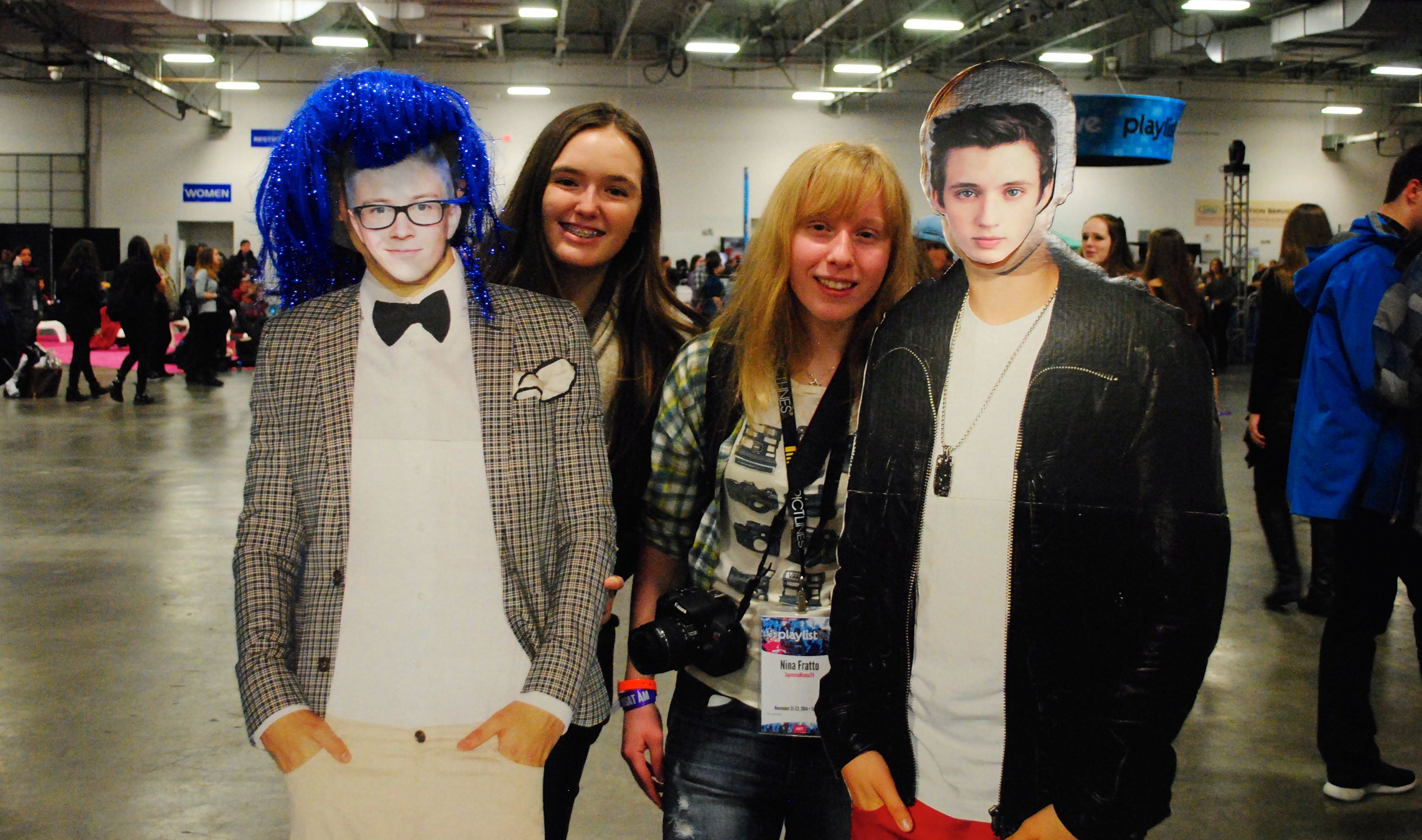 Fans pose with cutouts of Tyler Oakley and Troye Sivan

In one of the more extreme examples, fans crowded the doorway of a smaller panel room Connor Franta had just left. As he was lead away by his manager and event security, you could hear them discuss what had just happened. One girl asked if someone grabbed Franta’s hair when he walked out of the room, while another shouted, “I grabbed his abs! I grabbed his abs!”

In reality, the comparison is more complicated than that.

Unlike fans of the Beatles or the Rolling Stones, or new bands like One Direction and 5SOS, YouTube fans get an intimate look into the creators’ lives, not just what they may end up revealing in interviews or tweeting out. You don’t always see them on their best days. Even with the YouTube fame, they’re living a mostly regular life. They’ll share insecurities. Even if they are marketed to death, many of them still feel real and authentic. 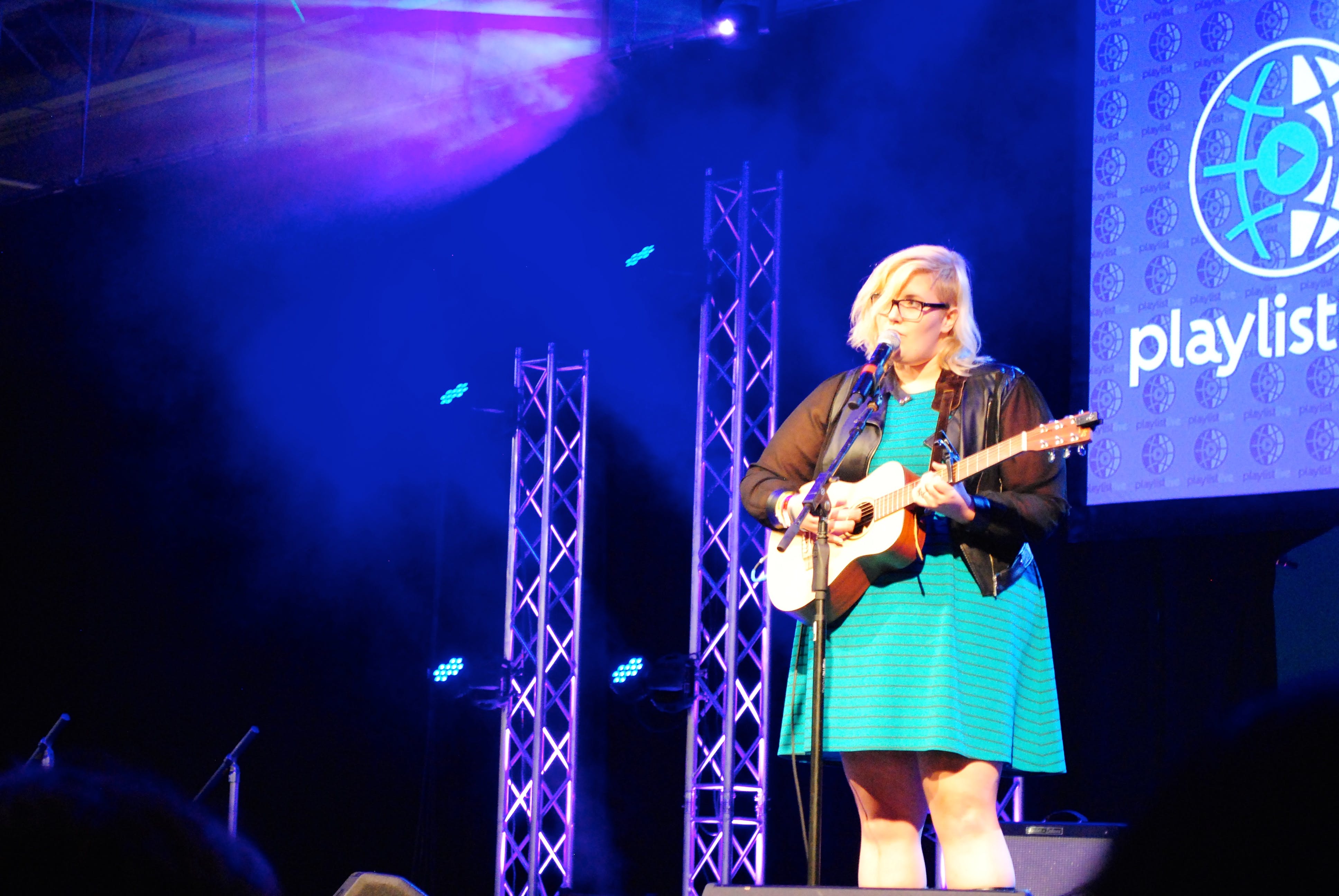 They’re not just idols. They’re like your friends, even if some fans will never get to meet them.

“I work real hard doing science, and people like [Hannah Hart] really help me de-stress,” Casey Zakroff explained. He attended the business panels on Friday to learn more about the industry and wants to make educational videos to encourage people to get into science.

At 26, Zakroff is hoping there is a place for him on YouTube. He’s based in Cape Cod—not Los Angeles or London—so he’s unable to attend most of the conventions, and he’s trying to appeal to a smaller niche than vloggers.

While some attendees who would’ve benefited from a business pass may have been deterred by the price, they did get a first-hand look at what it takes to make vines during a Vine workshop. Collab’s Will McFadden and Eamon Brennan paired the audience off with a number of Vine stars to brainstorm and film a clip in 15 minutes, and then vote on the best one. 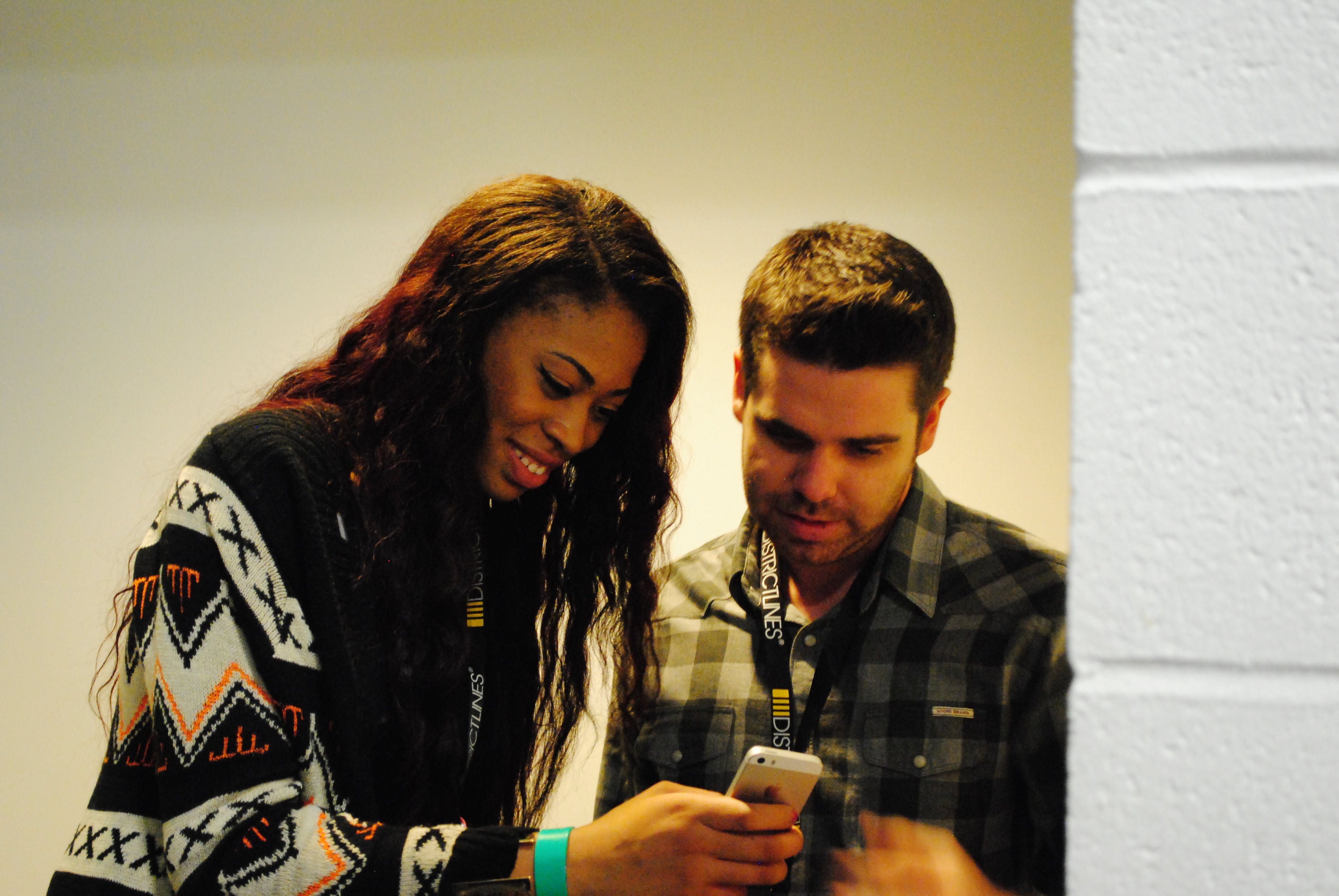 Creators are already inspiring a new generation of YouTubers: They’re even influencing a 60-year-old bald man, as Roker put it to his fellow panelists.

“I’m actually here for that other aspect of starting a channel,” said Krissy Montuoro, who attended Playlist Live with her daughter, niece, and one of their friends. “I do [know what I’d make], but I don’t want to say it because I don’t want anyone to take my idea before I do it.”

Parents hung out in a nearby lounge set up specifically for them, and offered looks of exhaustion as their children, more energized than ever, became excited for the next big thing on stage. Some of them sat on rugs placed in the main room, armed with an iPad or a book to combat the boredom. 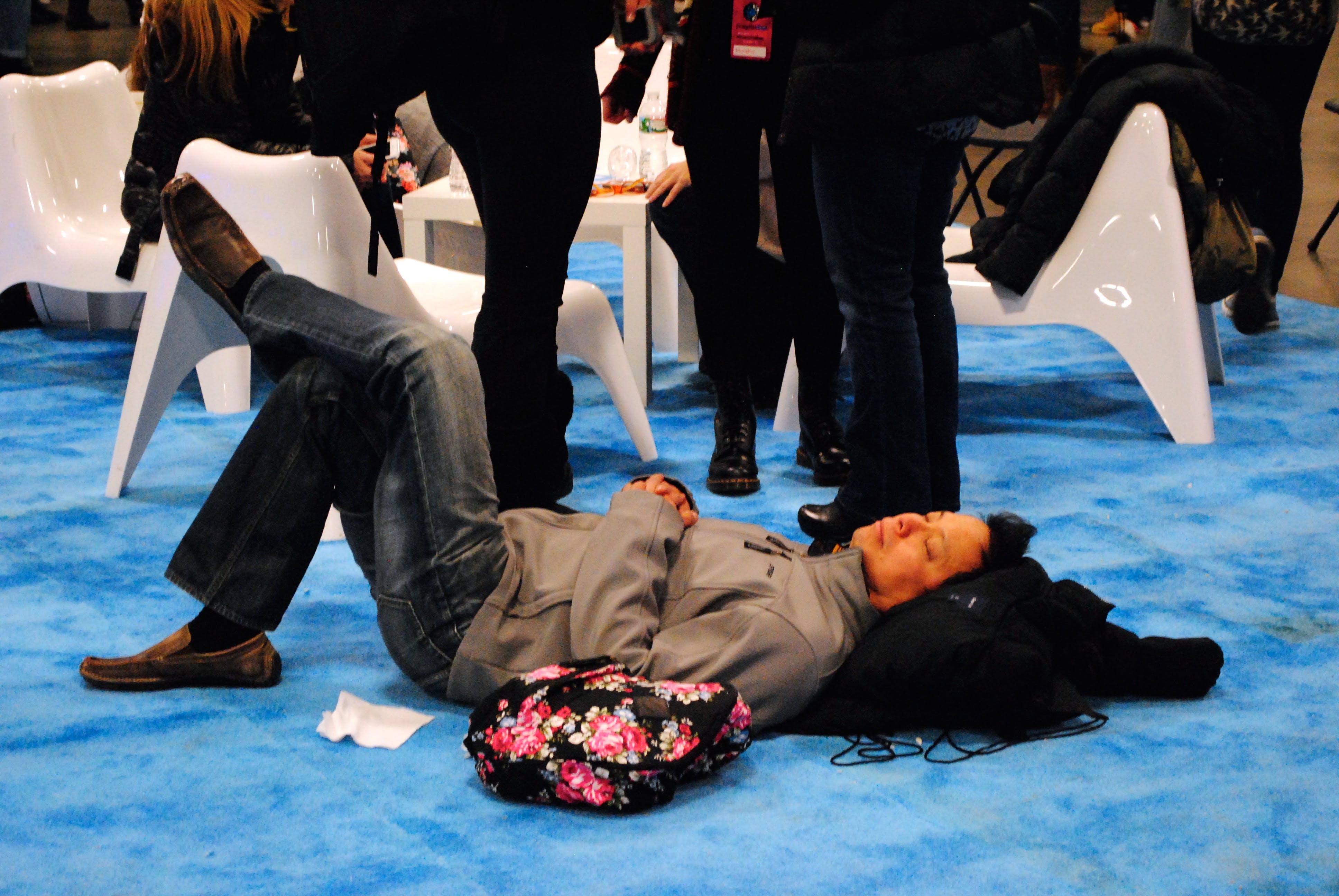 A parent shuts his eyes during a moment of calm

Some were baffled by it all, but others are informing themselves about the culture. After all, this could one day be a reality for their children.

“I have to tell you, I’m enlightened,” said Linda Kline, who came to Playlist Live with her 14-year-old daughter, Samantha. “My daughter wants to do this for a living, she wants to be a YouTuber. I kinda downplayed it because I want her going to school and having a traditional life. I now see that there are a lot more people like her here. I see why she fits into it more than the people at home.”

“My daughter wants to do this for a living, she wants to be a YouTuber.”

Although Kline wants Samantha to keep a balanced life, she still wants to support her and is even buying her some of the items she’ll need, such as an iMac and a camera, for Christmas.

Even some of the volunteers are broadening their horizons.

“Actually, last night [my sister and I] were Googling everybody on YouTube just to make sure we recognized the guests,” Deb Newton, who volunteered to help with the YouTube meetups, told the Daily Dot. She was impressed with what she’d seen so far but wished it was a little bit warmer. 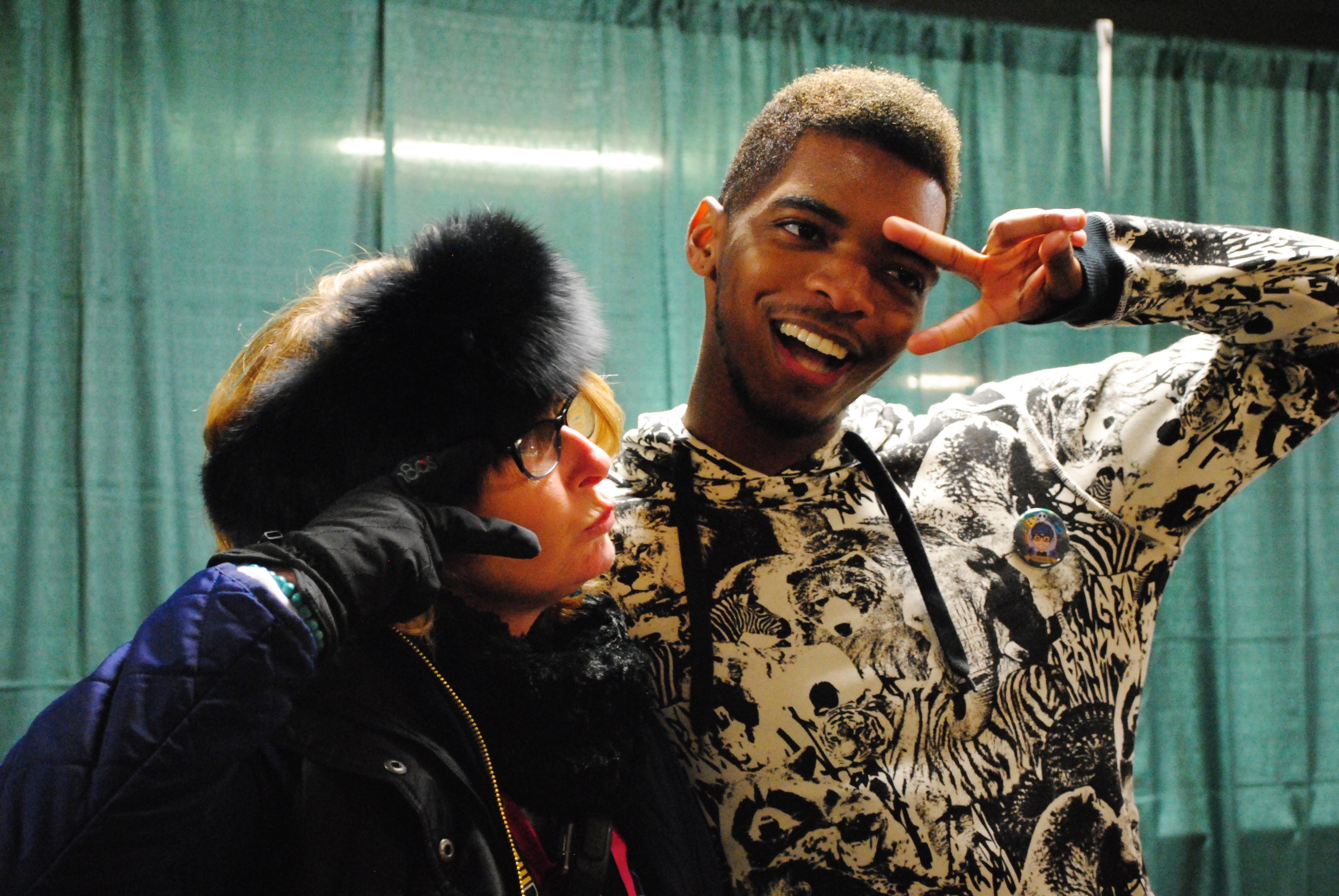 Noticeably missing from the convention was a conversation on the recent scandals in the YouTube community. A “Women on YouTube” panel only covered what it’s like to be a woman on YouTube, but panelists were asked more gender-neutral questions by the moderator. It’s a balancing act between covering issues many women are worried about and only talking about the issues. Jack & Dean, a YouTube duo with more than 395,000 subscribers, performed a song about consent for the crowd, who enthusiastically sang along.

Another panel, titled “I Came Out on YouTube,” brought some of the more prominent LGBTQ YouTubers together onstage, but it only represented part of the spectrum. Nobody was trans. Everyone was white, reflecting YouTube’s privilege problem.

“I went to the ‘I Came Out on YouTube’ panel and I’m pansexual, so that was something that inspired me to get into creating,” Emma said. “Because there’s one bi guy who has a base and then there’s a bunch of lesbian and gay YouTubers, but there’s no one who’s pan who’s really out there.”

It’s something the YouTube community is aware of and the panelists acknowledged, but they still have a long way to go. It may end up inspiring more people to speak out on YouTube about their experiences and become into the site’s next big stars.