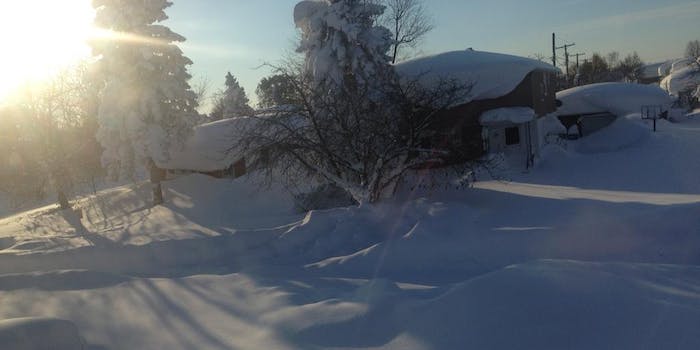 Look at the insane snow photos people are posting in Buffalo, N.Y.

A Buffalo police cruiser got stuck in the snow—and burst into flames.

“I haven’t ate since Monday,” a woman tweeted this morning on highway I-90 near Blasdell, N.Y., just south of Niagara Falls, Buffalo, and Lake Ontario. “Still stuck … 30 hours later. I’m hungry. I wish a magic carpet would appear now.”

The Buffalo area, along with the rest of western New York, is immobilized in a snowstorm that has killed at least six people and buried streets and homes under nearly six feet of white. It’s a state of emergency: More than 50 flights have been canceled at Buffalo Niagara International Airport. The city’s schools are closed.

READ MORE:
Interpol have been stuck in their tour bus for two days

Residents are stuck inside, with virtually nothing at all to do—except shovel their hearts out, and tweet insane photos like these.

PHOTO: The inside of Ralph Wilson stadium under a thick blanket of snow and blowing drifts. pic.twitter.com/7Hg3gFcOMI

Remember: mark your snow buried fire hydrants properly as to not be hit by snowplows #buffaloblizzard2014 #staysafe https://twitter.com/FlaskandStein/status/535078569681375232/photo/1

#BuffaloSnow #buffalostorm We have almost 4 feet of snow in parking lot of Regency Court Apts in O.Park & NOT 1 PLOW! pic.twitter.com/PFP729SQQC

And this house! #Buffalo pic.twitter.com/eYKvklCTcr

The Instagrams are crazy too.

Good morning from Buffalo. That’s a 6ft fence under that snow. Been stuck here for 26hrs now and no sign of moving soon. Also, a new snow front come through later… #tourlife #buffalo #snow #hothandroll

A photo posted by Mark Powell (@markandrewpowell) on

The band Interpol had to cancel a show in Toronto because their bus has been stuck in the snow outside Buffalo for 30 hours.

This story is developing. We’ll continue to update.