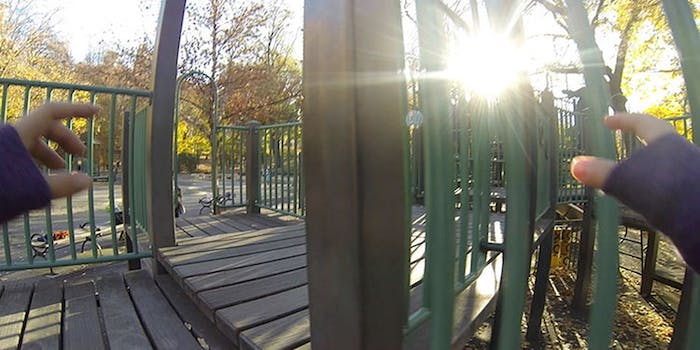 Were we ever really this short?

A new Kickstarter campaign is aimed at funding a short film—one shot almost entirely by kids fitted with GoPro cameras—that promises to illuminate the long-lost sensations of childhood. Twelve miniature cinematographers will be set loose on a New York City playground, free to do “whatever they like, however they please, and with whomever they wish to play.”

PLAY is a project spearheaded by Chris Mohney, VP of Programming at Maker Studios and himself a father with an interest in what kids get up to in their free time. His son Nate wore a GoPro for a demo.

“[E]ven in the test shoot,” Mohney said, “there were all kinds of little moments of tension between kids that created little micro-dramas over social hierarchies and such.” Those interactions that unfold out of parental earshot constitute a significant part of the raw anthropological material that he hopes to capture in the experiment.

The narratives woven by the participants will encompass “curiosity, friendship, estrangement, competition, physicality, triumph, frustration, and genius,” but most of all the “pure joy” of kids having fun together. For varied perspectives, both manic tykes and wallflowers will contribute: Mohney is “just as interested in those kids who are more into hanging out or the fringes.”

“All of it will be revelatory in its own way,” he said.