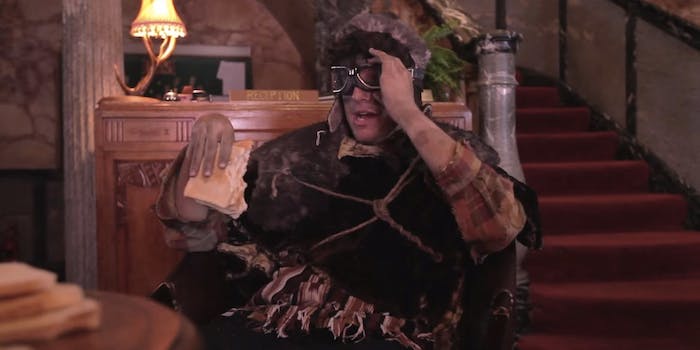 Patrick Stewart, Muppets, and YouTube A-listers, all in one wacky hotel.

On Sept. 15, PJ Liguori will re-introduce viewers to the guests at Oscar’s Hotel for Fantastical Creatures, and frequent YouTube viewers will recognize some familiar faces. Production company New Form Digital and distributor Vimeo have released details about Oscar’s Hotel, and its cast will include YouTube stars, well-known Hollywood actors, and the fantastical creations of the Jim Henson Company.

Oscar’s Hotel, which centers on a young man named Oliver who must manage his Uncle Oscar’s hotel and all the supernatural characters therein, is based off a short film Liguori released on YouTube as part of New Form’s first digital showcase. Out of 14 shorts, Oscar’s Hotel and Sawyer Hartman’s Parallax were given full series orders, with Vimeo On Demand serving as the primary distribution platform.

At the same time, Oscar’s Hotel is more than just a showcase of digital talent. Acclaimed actors Patrick Stewart, Alfred Molina and Elliott Gould are all among the cast, bringing it some serious gravitas. In addition, the fictional hotel’s inhabitants may take on a decidedly Muppet-esque flair, with Jim Henson’s Creature Shop signing on to design creatures.

“PJ Liguori is a very unique storyteller. We’re very proud to work with him and this amazing cast, in partnership with Jim Henson’s Creature Shop, on Oscar’s Hotel,” said Kathleen Grace, chief creative officer for New Form Digital, in a release. “The series embodies what New Form is all about – building creators’ visions into premium scripted originals.”

This star-studded cast provides Oscar’s Hotel with plenty of hype ahead of its September 15th release. In the meantime, feel free to reintroduce yourself to the world Liguori has created by watching his short film: