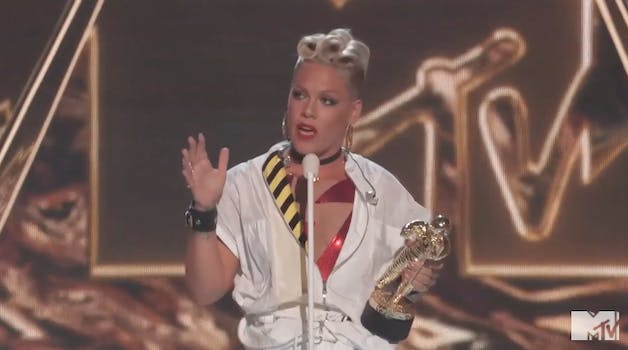 Pink accepts the Video Vanguard Award with a stunning performance

Since her 2000 debut, Pink set herself apart as a unique pop star. She was no Christina Aguilera or Britney Spears. Her masculine style and angry anthems garnered a lot of hate, while also catapulting her into the spotlight. Pink’s classics like “Don’t Let Me Get Me,” “So What,” and “Sober” worked because Pink mastered the art of matching vulnerability with strength. Her 2017 MTV Video Music Awards medley performance on Sunday reminded us how much she has stayed true to herself and her artistry after all these years.

In a very Pink fashion, she showed up to the VMAs with her family in matching suits. Her Michael Jackson Video Vanguard performance opened with the artist singing her 2001 hit “Get the Party Started” on an old car. As the car began to float from the ceiling, Pink then transitioned to “Raise your Glass.” She rocked her signature short hair cut and pants that read “wake the F*#k up” on them.

In her acceptance speech, she shared a personal story about her daughter. The onstage UNICEF ambassador recalled a time her daughter expressed that she thought she was ugly: “I look like a boy with long hair,” she said. In response the singer compiled a PowerPoint dedicated to androgynous artists from Michael Jackson to Janis Joplin. With over 47 million albums sold, Pink made a successful career turning insecurity into self love and acceptance of outsiders.

“We don’t change,” the artist said speaking to her daughter from the stage. “We help other people to change so that they can see more types of beauty.”

P!nk got me in my feelings with this story already #VMAs pic.twitter.com/ZRMUwYHRaS

P!nk with that speech #VMAs pic.twitter.com/cA6cRKmAin