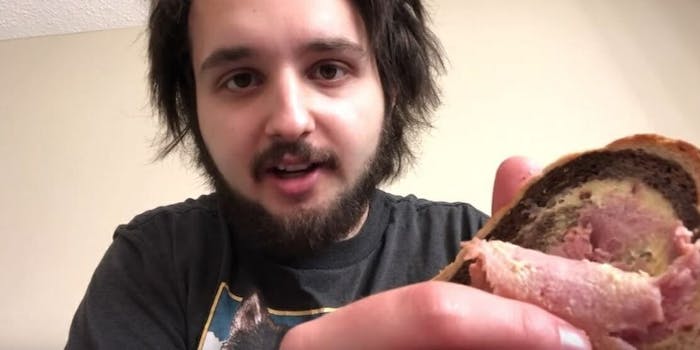 YouTube reviewer heads to homeless shelter to critique the food

Does this feel a little exploitive?

YouTuber PhilipSoloTV spends much of his time reviewing the products he procures in his Canadian hometown. Whether he’s taste-testing the lobster from the worst-reviewed fast food joint in town or spending an evening at the worst-reviewed hotel, PhilipSoloTV (almost 300,000 subscribers) consistently racks up hundreds of thousands of page views for his vlogs.

On one of his latest videos, he decided to review the food at his local homeless shelter. Perhaps it sounds exploitive or unfair, but in his vlog, he explained that he actually volunteers weekly at a local shelter. And he was simply curious about what he was serving.

“I don’t know if you’re allowed to partake if you’re not actually homeless,” he said in the video. “But it’s a huge shelter, and not many people know me. And I think I look homeless enough to where I could pull it off.”

After asking the shelter—which did not want him filming on location or interviewing anybody—he decided to go undercover as a homeless person and try the food. He was scared of being recognized, so he took the food and planned to place it in plastic baggies for later consumption (it turns out, he ended up sticking all of it in his coat pockets).

Before that, he interviewed people (though none of the people in line at the shelter are shown) who describe their troubles. One said he lost all of his friends when he lost his home. Another said he was addicted to crack. Eventually, PhilipSoloTV, after buying a bag of McDonald’s and giving it to what we assume was a homeless person on the street as a kind of atonement, returned home and began eating.

He tried some kind of onion-potato soup that had cauliflower in it (he liked it), the pocket salad (he called it bland), some kind of deli meat sandwich (as he said, it’s hard to fuck up a sandwich), two cookies (that were covered in salad), and some kind of Christmas-themed pastry.

When he was finished, PhilipSoloTV declared, “I have mixed feelings about this food. Some of it was good. Some of it was bad. All of it is going to feed the less fortunate. I encourage everyone to volunteer at their local shelter.”

That’s a nice sentiment, but if you do, don’t try the wares for yourself. Just leave the homeless shelter food for the people who really need it.