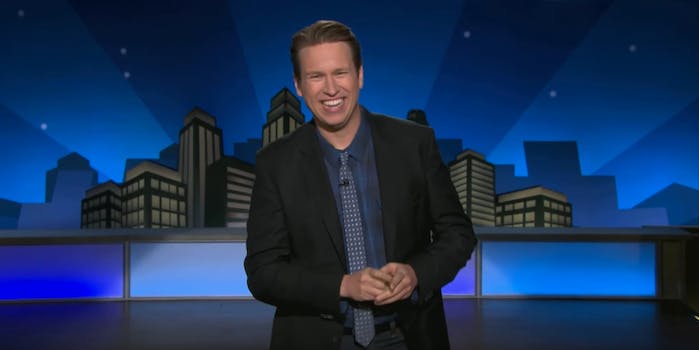 'Take pain and make something good.'

HBO announced this week that it’s picked up a half-hour comedy called Crashing from standup comedian Pete Holmes. The semi-autobiographical show, which Holmes will also star in, is about a wholesome standup who couch surfs through the living rooms of New York City’s best comedians as he recovers from his divorce.

This show comes straight from my heart. Podcast fans know one on my mantras is “take pain and make something good.” Diehard fans know that I’m embarrassed this quote came from Kickass 2. But to take a painful past experience (divorce) and turn it into something funny and redemptive is beyond a dream come true.

Holmes’ popular podcast You Made It Weird has firmly cemented his position as one the kindest and most humble standups in the comedy scene. It’s safe to say the series will probably tug some serious heartstrings while it makes you laugh. Judd Apatow is slated to produce the series, which adds to his growing roster: He’s also producing Love (starring Community‘s Gillian Jacobs) and Pee-wee’s Big Holiday for Netflix in addition to Girls for HBO.

Pilot I did for HBO w Judd Apatow & Pete Holmes got picked up for a season Thx Judd & Pete! & yes I spoke to catering re: my special needs!