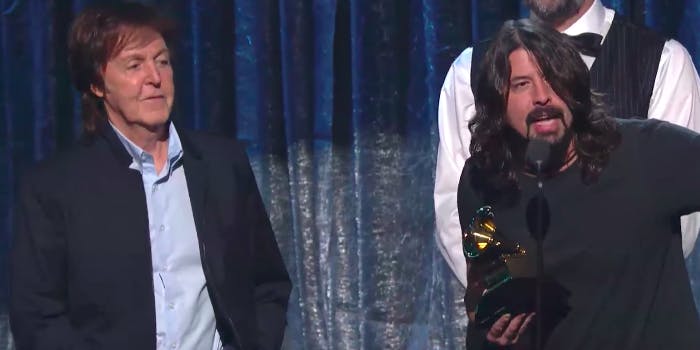 'He's great. He's the most wonderful person in the world.'

There are few greater joys in the life of a music writer than watching Paul McCartney jam with artists half his age and school them on what it really means to be a rock star, just because he can. Sometimes the final product sounds a little too try-hard—like the awful Kanye/Rihanna collab “FourFiveSeconds“—but more often than not, the results are electrifying, and McCartney’s unbridled passion for playing his instrument takes the track to the next level. It seems safe to assume he’ll capture that same magic on the Foo Fighters’ upcoming album, Concrete and Gold.

Foos frontman Dave Grohl teased a high-profile cameo last month on BBC Radio, telling host Annie Mac that he’d nailed down “the biggest pop star in the world”—and no, he didn’t mean Adele or Taylor Swift. He later confirmed to ET Canada that McCartney played drums on one of the songs, adding, “We’ve known him for a long time. He’s great. He’s the most wonderful person in the world.”

"The biggest pop star in the world" features on the new @FooFighters album 🤔 Dave Grohl tells @AnnieMac all about new music & Glastonbury! pic.twitter.com/WA6ZozxRi9

He’s apparently one of the most efficient drummers in the world as well, as he nailed the track in no time.

“He hadn’t even heard of the song,” Foos drummer Taylor Hawkins said. “He comes in and Dave picked up an acoustic and showed him real quick. He sat on his special drum set that his tech set up for him. I sat there with a drumstick conducting. He did two takes.”

It should come as no surprise, given the virtuosity of all parties involved. McCartney and Grohl previously collaborated on the song “Cut Me Some Slack,” alongside Grohl’s former Nirvana bandmates Krist Novoselic and Pat Smear.