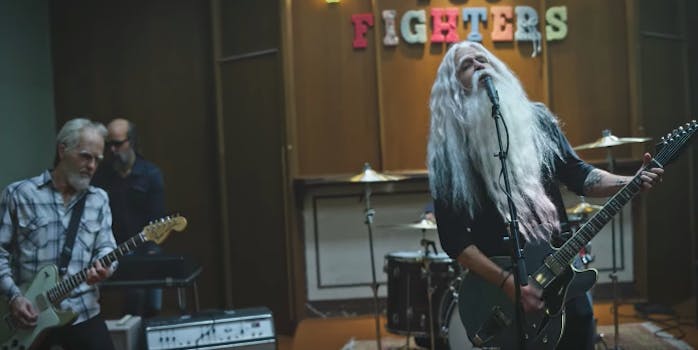 Dozens of elderly folks break free from the confines of their drab nursing home in the video for the Foo Fighters’ raucous new track, “Run.”

The single marks the group’s first release since 2015’s Saint Cecilia EP. Frontman Dave Grohl directed the new video and stars as the bearded, gray-haired leader of a geriatric rock band. “Wake up, run for your life with me,” he croons, before unleashing his distorted howl over a crunchy riff that propels the bulk of the song.

As the band thrashes, the seniors overthrow the millennials who staff their assisted living community, moshing in the chapel and spilling out into the parking lot. They quickly storm a car full of hipsters, one geezer dragging a passenger out by his man-bun and taking a few massive hits off his vape. The car speeds away as the seniors break into a flash mob before collapsing on the pavement in an exhilarating, poetic finale.