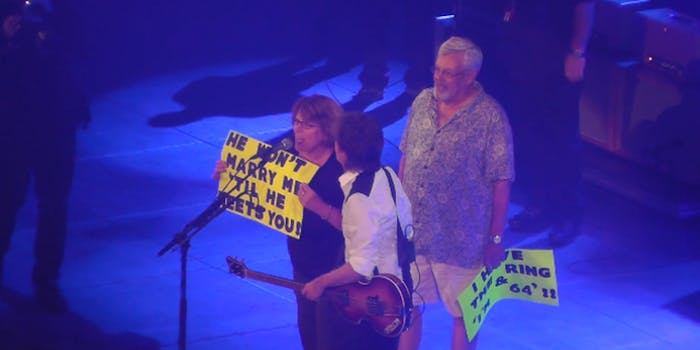 Paul McCartney helps couple gets engaged at his show

How could the wedding top this?

Sir Paul McCartney might be giving Bill Murray a run for his money. On Saturday night, he helped two fans get engaged.

This happened at his show in Albany, so it wasn’t as random as Bill Murray crashing an engagement photo. McCartney, who’d recently been hospitalized, noticed two neon signs out of the many fans hold up at his shows. One said, “He won’t marry me ‘til he meets you.” The other said, “I’ve got the ring and I’m 64.”

The couple, Claudia Rogers and John Dann, met on Match.com eight years ago, and they were invited on stage by McCartney, so Dann could finally pop the question—and, of course, sing “When I’m Sixty-Four.”

H/T The Wrap | Screengrab via squintyt4e/YouTube