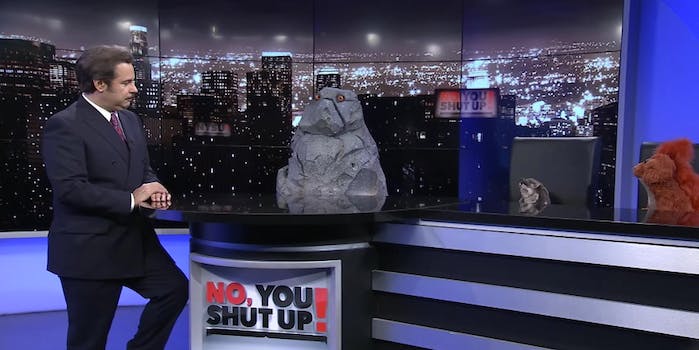 Screengrab via YouTube/No You Shut Up!

Get your 2016 election coverage from Paul F. Tompkins and a pile of puppets

We already mentioned Tompkins and Henson puppets. Why haven't you clicked yet?

What The Daily Show’s “Indecision: 2000” segment was for that presidential election, No, You Shut Up! will be for 2016.

You don’t often see the showrunner of Hannibal debating with live-wire puppets about the topics of the day—reforming the criminal justice system, election coverage, you name it—but here it is, entering its fourth season on Fusion.

Hosted by Paul F. Tompkins, No, You Shut Up! is a punditry-related, loosely paneled talk show that advertises argument as intellectual debate on various timely topics. Except here, the pundits are puppets. No, not metaphorical ones—they’re real, Jim Henson Company puppets that are operated and voiced by real Henson-trained pros.

“By this point, everybody kind of already knows what their character would say,” said Tompkins of his crew. “We have a core group of five puppeteers, who play several different characters. The puppeteers all have backgrounds and training in improv, so they’re a very versatile group of people.”

Besides the experts behind the puppets themselves, the show lists 78 cast members from the past three years. That’s a lot of puppets, but also approximately one guest star per episode—a human who sits on the panel and tries his or her best to keep a straight face. Those humans have had some big names, like Bob Odenkirk, Tig Notaro, Jack Black, and Bryan Fuller.

And that’s not all for its pedigree: That Daily Show comparison is no accident. No, You Shut Up!  was created by David Javerbaum, who was a former head writer of the Comedy Central staple; he’s since moved on to join the new Late Late Show with James Corden, but his influence lives on.

“He created the show, and was with us for the first couple seasons, and now he’s working on the James Corden late night show,” Tompkins told the Daily Dot. The Henson Company signed on after the idea was presented, which then got Tompkins on board with no arm-pulling.

Tompkins couldn’t give too much away about the plans for this season—or its corresponding election coverage—but after 50 episodes, the core crew of puppets and Tompkins have cemented a dynamic that’s perfectly primed to make something like election coverage really shine. And even the few facts we do know make it worth sticking around for: This year’s election coverage includes debates by puppets such as “Dwayne Johnson,” who looks like a rock, and the show has Patton Oswalt running for president under the Republican ticket.

All past episodes are available to Hulu subscribers, and during season 4, new episodes will air on Thursdays before coming up for free viewing on the official Fusion site eight days later. As with most of Fusion’s programming, the creators will be supplementing the online clips and episodes with online-exlusive content.

“They’ve been nothing but supportive… it’s great to know they’re on our side,” Tompkins said of Fusion. “I think they’re putting their money in the right direction.”

At the very least, it’s a unique direction: It’s unlikely we’d see this material anywhere else.

Screengrab via No You Shut Up!/YouTube