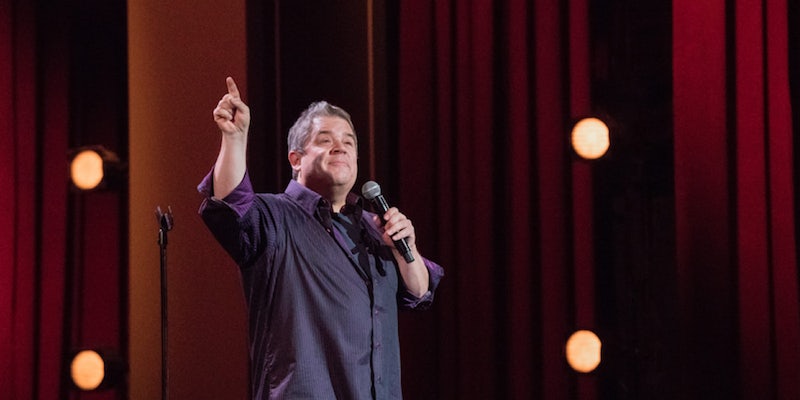 Patton Oswalt works through the void on ‘Annihilation’

Annihilation means a few things in Patton Oswalt’s new Netflix special, and gets the first allusion out of the way early: Trump, Twitter, and the age of anxiety. The comedian peppers his observations of Trump’s “origin story” and mannerisms with more vivid descriptions of the commander-in-chief, like “racist scrotum dipped in Cheeto dust.”

That sets the table for Patton Oswalt: Annihilation, which follows up 2016’s Emmy-winning Talking For Clapping, but not the tone. Oswalt’s strength is storytelling and here he weaves in and out of bits about DNA testing, witnessing a fight, and robocalls to give the special some levity. He indulges in an extended crowdwork session that in other specials might signal a drop in momentum, but here it’s how Oswalt warms himself up for talking about real annihilation.

Talking For Clapping was released the day after his wife, true crime writer Michelle McNamara, passed away unexpectedly. Over the next year, Oswalt was quite public about the grieving process and what he was experiencing. In a Facebook post from last August, Oswalt conceded that he’d have to start doing comedy again: “What other choice do I have?” In a way, his special is a companion piece to Sarah Silverman’s A Speck of Dust, in which she mused on her own brush with death—and the death of those close to her—and whether she’d be able to return to comedy. Both specials weigh “How could I?” with “How could I not?”

He gets into the murky parts: People telling him to be strong on his “healing journey”; trying to make sense of why she was taken and he wasn’t; questioning whether he was the one who’d actually died. One of the heaviest parts is Oswalt telling his young daughter that her mother is gone, and taking her principal’s advice to “tell her in the sunshine.”

There aren’t a whole lot of punchlines here, just Oswalt working through the void. But comedy often relies on repetition, and he cites a favorite phrase of McNamara’s to explain her worldview in the face of awfulness: “It’s chaos. Be kind.” Oswalt repeats this phrase to give us insight into who she was, but it also doubles as a mantra for those of us who might feel helpless or lost in the age of anxiety.