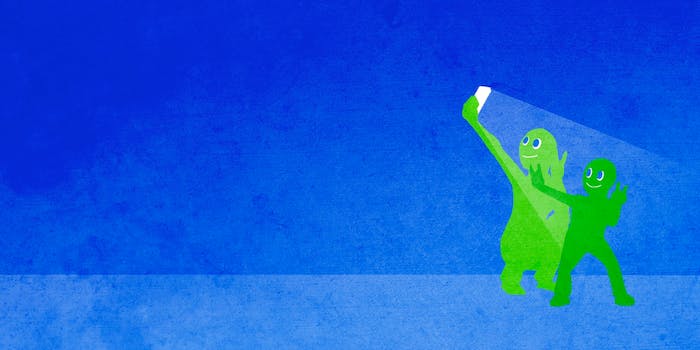 Building trust in the age of a million apps.

On the final day of VidCon, the Kia Parents’ Lounge is looking rough.

In one corner, a woman is curled in the fetal position on the ground, with a bottle of Pepto-Bismol next to her. On a couch, a father stares into space, his face twisted into a grimace as if in pain. The day before, another woman had made a makeshift sleeping bag out of VidCon swag and pillows. It looked like she was sleeping but then I saw her arm extended: She’s staring, dead-eyed, at her phone.

There are some people standing upright, like Allie Goertz. She’s been giving daily tutorials to parents who want to follow their kids on social media, but aren’t sure of the etiquette. Goertz, who runs social media for Comedy Central’s @midnight, says the biggest concern this year has been Snapchat, and how they can see what their kids are doing on it.

“There are two camps of VidCon parents,” she says. “The first camp is really wanting to be the friend of the kid, and the other camp is really wanting to spy on their kid at all costs. I will say, ‘Well, you have to create trust.’ They might say, ‘Oh, they’ll get over it.'” She says there have been discussions among parents about giving their kids space and how that often leads to kids opening up to them more.

Another common mistake, on Instagram especially, is to post too many pictures of your kids. “Be select, treat it like an art gallery,” Goertz says. “This is showing off who you are. And understand there are some apps you’re just not allowed in. Just like you’re not allowed to go over to their friends’ house when they go to hang out. The social etiquette rules work on and offline.”

She adds: “You have to be a social media friend. …A lot of what makes VidCon so great and these different apps so great is that these kids are able to be completely themselves, so there’s really no need to spy anymore.”

“You have to be a social media friend.”

The hard line between parent and friend was a little softer at VidCon 2016. Many parents walked around the Anaheim Convention Center floor livestreaming right next to their kids, or following along behind screaming masses trailing a random YouTube star, phones up. Families have become increasingly popular (and profitable) on YouTube, and panels, like Being a Mom on YouTube, addressed how parents are balancing work/life/celebrity. Netflix no doubt sees the crossover potential, too: It pushed upcoming series from popular personalities Miranda Sings and Cameron Dallas in its quest to target the YA market.

Goertz says she’s had several parents tell her that seeing their kids have fun on YouTube or social apps has made them want to try it out too.

“I’m really not trying to snoop,” one mother of a 13-year-old told me. She’s on Instagram and has recently started getting more involved with YouTube independent of her daughter. She knows what a Jacob Sartorius is, but says her daughter is more of a fan of female YouTubers.

“And that’s given us more to talk about,” she adds.