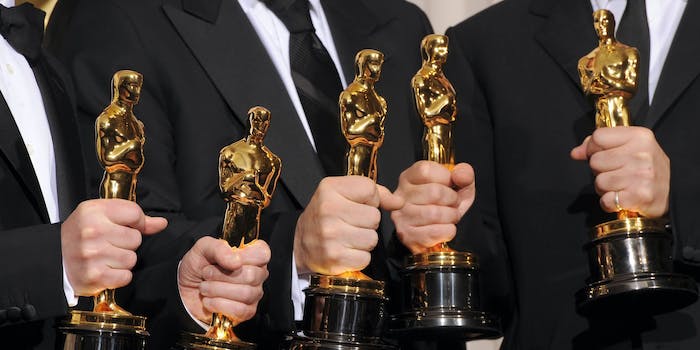 Some streaming titles can qualify for Oscars without a theatrical run

The new rule was added because of the coronavirus pandemic.

The Academy’s Board of Governors announced some movies that opted for streaming and video on demand releases will qualify for the 93rd Academy Awards.

Previously, films had to screen in a movie theater in Los Angeles County for seven consecutive days (and screen at least three times a day) to qualify for Oscar eligibility. But the coronavirus pandemic has shuttered movie theaters for the past several months, leading some studios to delay upcoming releases, push the films to streaming services, or skip an eventual theatrical release altogether with a digital release. But as some states are easing restrictions and allowing theaters to open again, many chains are refusing to reopen theaters—and some are holding their upcoming releases—until it’s safe for people to go to the movie theater again.

The rule change applies to films that originally planned to have a theatrical release but can no longer do so. Those films also have to be made available to members in the Academy Screening Room within 60 days of release.

“The Academy firmly believes there is no greater way to experience the magic of movies than to see them in a theater,” Academy President David Rubin and CEO Dawn Hudson said in a statement. “Our commitment to that is unchanged and unwavering. Nonetheless, the historically tragic COVID-19 pandemic necessitates this temporary exception to our awards eligibility rules. The Academy supports our members and colleagues during this time of uncertainty. We recognize the importance of their work being seen and also celebrated, especially now, when audiences appreciate movies more than ever.”

Once theaters are open again, the Academy is expanding the cities for qualifying theatrical runs beyond Los Angeles County to include New York City, the Bay Area, Chicago, Miami, and Atlanta. And while Netflix and Amazon Studios have begun to become part of the Oscars, the rule change to allow streaming titles to qualify is temporary; the Academy still prefers the theatrical experience.

The Academy also announced that it’s consolidating the sound mixing and sound editing categories into one category for achievement in sound, what qualifies for original score, and the expansion of preliminary voting for international film.