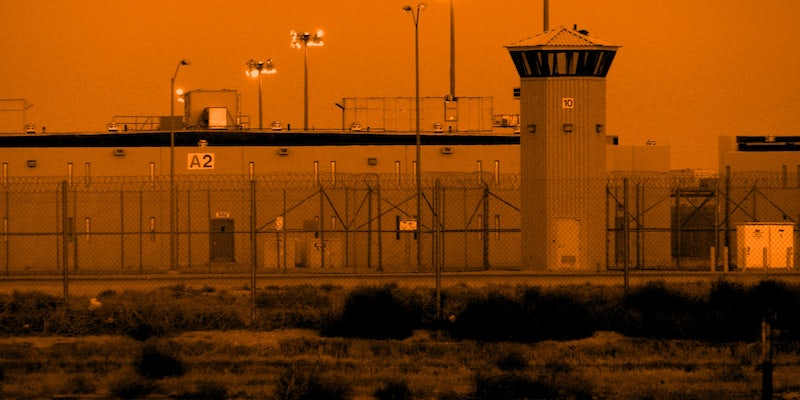 How much does ‘Orange Is the New Black’ mirror real prison life?

The Netflix show has offered a way to talk about prison abuses and reform.

As we’ve collectively binged on Orange Is the New Black season 2, certain storylines and characters resonate more than others. We all have our favorite OITNB character because we relate to some aspect of that character sketch. Do we know these women in our real lives?

One of the most important aspects of the show is how it tells their stories. We don’t just get the backstories; we see the women interacting with one another in humanizing ways, and flashbacks reveal less about what landed them in prison and more about the parts of themselves they don’t necessarily show to the other inmates. The structure of the prison mirrors the narrative latticework of the prisoners’ lives.

As the focus moves away from Piper Chapman (Taylor Schilling), season 2 expands the storytelling, and the hierarchies: Vee, Red, and Gloria are positioned as “mother” figures. Vee (Lorraine Toussaint) is Litchfield’s ultimate hustler, able to change masks with terrifying ease, and the prison economics of OITNB parallel to the personal storylines. As Vee says to rival importer Red in the “blackout” episode, “You just tried to strangle me with plastic wrap so you can sell mascara in jail.”

In that same pivotal episode, activist prisoner Brook Soso cheerfully undercuts it all: “We’re all just women having a shared experience of deprivation.”

Last summer, show creator Jenji Kohan explained how the character of Piper was her “Trojan horse”:

“You’re not going to go into a network and sell a show on really fascinating tales of black women, and Latina women, and old women and criminals. But if you take this white girl, this sort of fish out of water, and you follow her in, you can then expand your world and tell all of those other stories. But it’s a hard sell to just go in and try to sell those stories initially.”

Alexis Sturdy is co-founder of Wesleyan’s Center for Prison Education, which offers courses to inmates. When she was attending college at Wesleyan, she started volunteering at York Correctional, a women’s prison and state facility in Connecticut, as well as a juvenile detention center.

At the women’s facility, she ran a reading group, and eventually lobbied for Wesleyan courses to be offered to male and female inmates. York is also where author Wally Lamb ran his writing workshop for years and where Sturdy met with Piper Kerman, who was incarcerated at a federal prison in Connecticut, a few times while she was there. She sees Orange Is the New Black as a way to talk about prison abuses on a more mainstream scale.

“It’s unfortunate it took the naive white girl storyline to make the show happen, but at least it’s happening,” she says. “I think they do a great job with the interpersonal storylines, and how they ally with each other.”

The real jail where OITNB is filmed was recently spotlighted for its inhumane and unsanitary conditions. We asked Sturdy a few more questions about how OITNB mirrors the realities of prison.

That was one of the more interesting things to me: the interpersonal dynamics, but also the power dynamics between the prisoners, and the hierarchies that form. Did you see much of that?

Yeah, and it was hard for me to see exactly where people got their power from. There are people who exist in the facility who seem to exist outside all of that, and keep to themselves, and I appreciated when Piper tried to do that in the first season. I really felt for her, but I think it’s almost impossible to exist in prison and be comfortable and not play into those dynamics.

The character of Vee is sort of a matriarch, and this hierarchy immediately forms beneath her, and plays into those dynamics.

Yeah, and it comes in different forms. I also knew a mother-daughter relationship inside prison. The staff [on the show] is written so well, and how the correctional officers really live for this power dynamic. There’s that scene from last season where the two COs got to a bar and they’re still obsessing about the women.

Do you think there should be male correctional officers in a women’s prison?

Ideally, no. I think that would remove the opportunity for sexual and physical violence, but the female officers aren’t much better.

It’s still a position of power.

I found in my six years going in and out of prisons, I had watched really young, seemingly kind officers take that role, and be diverted by the power. And I think there’s so much to be said about where correctional officers are coming from. For a lot of them, it’s the highest-paying job in their neighborhood. My idea for prison reform would be to fix the correctional officer culture.

You mentioned that the sexual violence storylines resonated with you. What other storylines?

It was small, but it was my favorite scene last season. When Piper’s boyfriend comes to visit her the first time, and the officer’s dragging her feet, “Oh, you have to do this paperwork. Oh, you should have done this.” Another degrading thing we do to prisoners is forcefully cut ties from family, in ways that I think the show portrays, and how nearly impossible it is to visit, specifically in a federal prison. You could be from Florida and be sent to a prison in Wisconsin. It’s been proven by every study ever done that the best way to help someone re-enter society and not reoffend is to have ties to their family.

Another story that resonated from last season was how quickly Taystee came back to prison. When our students are released, it is a struggle to get on your feet, because there’s no… You’re put so far back. No one wants to hire ex-cons or rent apartments to ex-cons; your family hasn’t kept in touch with you, and they’re underserved by plenty of resources as well. You’re returning home to communities that are cycles for incarceration. … Officers bringing in drugs is also a very real problem, and drug use inside prisons. There are no addiction services, and then COs bring it in and make a killing.

Were there any individual stories that stayed with you?

In the men’s and women’s prison, an overwhelming majority were victims of pretty heinous crimes in their life, in their childhood. In their application essays … the women are way more willing to open up about themselves, and maybe that’s from being in an all-female environment, but I know the women’s stories way better than the men. They’ll tell you about their crime within three hours of meeting you.

One of the women in Wally Lamb’s [book], Robin Ledbetter, I don’t remember the specifics of her story, but there were abusive, addicted parents. [Ledbetter is currently serving a 50-year sentence for killing a cab driver when she was 14.] We were starting our first class, and going around doing college icebreakers, “I’m Lexi, I’m from Cooper City, Florida. I’m a sociology major.” Robin goes next, and she’s like, “I’m Robin, I’m from York Correctional.” That answered just floored me, but if I moved somewhere when I was 14, I’d say I’m from that place too. Those are your formative years. And a high percentage of our students have been incarcerated since they were teenagers.

What are the most pressing issues that need reform in prisons?

Each state calls their prison system something different, but in California, the prison system has rehabilitation in its name. The prison system has boomed, and it’s so expensive. And somehow none of the money or resources have gone to the main idea, which is rehabilitation. It depends how you frame this politically, right? I’d say, “You need to help get them the resources to help them get back on their feet.” But I’m sure there are people who’d say we don’t owe them anything. They committed a crime.

Education is the biggest component of it, and mental health services. Programs on the outside to help them re-enter society. The thing I always end up saying in conversations about prisons is, it’s such an oxymoron, because if it worked, it’d put itself out of business, and no correctional officer wants to lose their job. And I think the show does a good job of showing that [in] all these communities in rural upstate New York or rural Connecticut, the prison is its main employer. And if it shut down, that entire district is out of a job.

One other thing I’ll say about the power dynamic is that our program has always had a hard line of admitting people with all lengths of sentences. We have lifers in our program, and we think that’s really important because, first, we wish this was a service everyone in the prison could get. But a great byproduct of that choice is that we have people in all ranks of the hierarchy, and a lot of times the leaders, or so-called matriarchs or patriarchs, if they’re in our program and are getting a college education, then we see all their disciples applying.

Photo via Rennett Stowe (CC BY 2.0) | Remix by Jason Reed