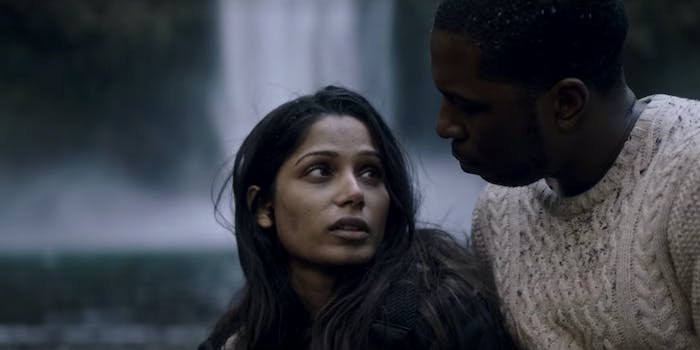 A dystopian drama is even more relevant upon its Netflix debut.

Since most of the U.S. went into lockdown back in March due to COVID-19, we’ve largely been watching a lot of movies and TV. For some of us, our taste has either gravitated towards an escapist watch that transports us to worlds in which a deadly virus cannot burst through, or the Contagion-esque, too-close-to-home pandemic-tinted watches that show a horrific and fictionalized illness or virus.

Both of those routes, in their own way, offer a sense of comfort. With lighter entertainment, you can pretend that things are OK for a couple of hours. With the heavier fodder, there’s comfort in how things play out or the increasingly less likely by the day belief that at least we can’t screw things up as much as this movie.

That is, and isn’t, the case with Only, the dystopian drama from director Takashi Doscher that thrusts you into a near-future where the world is torn apart by a pandemic as the government tries to restrict women’s reproductive rights. (Sound familiar?) Only is centered around Will (Leslie Odom Jr.) and Eva (Freida Pinto), a couple who go into a strict quarantine after ash from a comet that passes over Earth leads to a deadly pandemic: Men who encounter the ash can become carriers of the virus, but for women, it can kill them within a week—and there isn’t a cure.

It’s a small film that premiered at the 2019 Tribeca Film Festival, but it didn’t get a brief (in part thanks to the pandemic) theatrical release until March 2020. It ended up on Netflix earlier this month, where it ranked on Netflix’s daily list of top 10 movies for nearly two weeks; it peaked at number 2 on July 9.

I first encountered Only in a much different environment than many of the people watching it on Netflix now: In a press and industry screening in a tiny and private theater in New York, one I couldn’t imagine entering again anytime soon. I walked out of the theater liking the performances, but the more I sat with Only, the more my overall impression of the film soured. (Only is currently sitting at 40% on Rotten Tomatoes.) The first time I watched it, the blatantly misogynistic and anarchistic world that Only descends into stood out much more than the quarantine elements; when talking about the film to friends who hadn’t seen it, I mentioned that it made The Handmaid’s Tale seem subtle in comparison. I ended up largely forgetting about it until very recently when I saw it pop up on Netflix’s charts.

And sure, the link between the Handmaid’s Tale-heavy attitude toward women in Only to ours still looms large. At one point, a news anchor actually announces that the House and Senate unanimously approved increasing the reward for the “successful reporting or locating of live American females” from $1 million to $2 million. When Will buys a gun for self-defense, the pawnshop owner (who assumes he needs the gun for hunting women down) advises him not to shoot them in the ovaries. Arthur (Jayson Warner Smith), who captures Will along with his stepson Casey (Chandler Riggs), assures Will that he’s not a monster. But in the same breath, Arthur also stresses the importance of locating a sick Eva because her eggs would still be viable up to six or seven hours after she dies and asserts that his dead wife would’ve turned herself into the authorities if she could.

It’s often a heavy-handedly cruel and callous film (in both its depiction and execution) that focuses on fertility and reproduction even above a cure and features both transphobic language and a woman using a binder to move around in a world where men would be paid handsomely to hunt her down. As to what would happen to her? There are only hints, none of them good or even remotely humane.

But while Only isn’t necessarily a good movie by any stretch of the means, it was fascinating to watch its meticulous depiction of quarantine. Now that we’re months into our own quarantines, that’s how it feels. As soon as Will realizes that the illness taking over hospitals only affects women, he finds a way to get her home without exposure. With the help of Eva’s dad, Will seals off the apartment he and Eva share, places plastic barriers on her bedroom, and installs UV lights to help kill the virus; even one of the police officers who eventually raid their apartment is impressed with the quarantine efforts.

The worldbuilding is less through its environment—which is largely restricted to Will and Eva’s apartment until they finally venture out of it in the present-day timeline—but rather how they quarantine in the 400 days leading up to it. There’s a routine that Will follows (and yells at Eva to follow) whenever he returns home. They scrub surfaces with Lysol, wear protective gear like masks and gloves around one another, and when Will discovers he’s a carrier, he’s even more cautious about not touching Eva.

“You and I both know how this goes,” Will explains after Eva starts showing symptoms of the virus. “Day one is hemorrhaging. Day two is dizziness and loss of motor control…Day four is seizures and convulsions if you make it that far.”

But Only is often more interested in exploring the extreme isolation that comes with a quarantine of this nature rather than the virus itself—which isn’t necessarily a bad thing. Eva finds a connection with a private chat full of women located around the world who don’t reveal any personal information because they never know who’s monitoring them in a world that’s more or less descended into chaos, but the longer the quarantine lasts, the fewer women return to the chat.

While there is a definite eeriness to watching Only in the middle of a pandemic—for instance, it only took the U.S. four months to bring secret police into the mix—it also drives home a few things about our own quarantine and how making efforts to protect yourself and protecting others works, as well as the importance of being able to keep in touch with others. The virus in Only is much more extreme, so while it’s not safe for women to go out at all, we’re able to do so with masks. And Eva’s anger over her restrictions have much more root and weight than those who argue they’re being infringed upon because some businesses won’t let them inside without a mask.

Will is ultimately content as long as Eva is safe, but she resents having the men in her life make these decisions for her. By the end, we come to find out that Eva’s illness was entirely avoidable: She knowingly exposes herself to the ash after learning that the U.K. government took her mother despite her age and an argument with Will—which likely alerted the police to her location.

Sure, it may have been a choice of freedom for her, even if she was doomed no matter what (whether the virus killed her or government experimentation), but now? It also feels even more selfish than it did before.