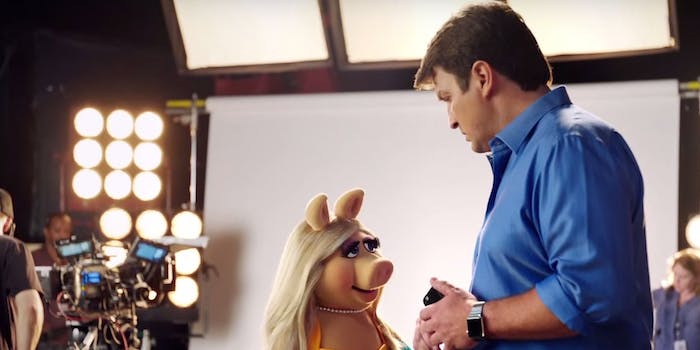 The Muppets hasn’t even premiered yet, but One Million Moms is apparently not happy with the choices these newer, freer Muppets have made.

On Friday, a petition was launched by the pro-family group warning parents about the show and its characters’ lack of morality:

The mature version of “The Muppets” will cover a range of topics from sex to drugs. Miss Piggy came out as a pro-choice feminist during an MSNBC interview. The puppet characters loved by kids in the 1970s and 1980s and beyond are now weighing in on abortion and promiscuity.

ABC hopes children watch the show and predict they would enjoy some of the humor, but 1MM would disagree. It is not the show it once was. ABC has ruined “The Muppets.” How many parents want to explain the punchline of sexually charged jokes to young children?

Many parents unknowingly will let their children watch an episode only to find out its perverted nature too late, unless they are alerted ahead of time. 1MM and others need to get the word out to families to avoid this program at all costs. Please forward this to everyone you know!

Meanwhile, parents will have to explain to confused children that the program they once were allowed to watch is no longer a nice show. This would have been completely unnecessary if ABC had made the program follow its original family-friendly design.

Yes, the promo for this new version of The Muppet Show has been a little weird. Fans have already had a meltdown over the breakup of Kermit and Miss Piggy, and lobbed sexist insults at Kermit’s new love interest, Denise. Sure, there’s a promo where Miss Piggy comments on Nathan Fillion’s butt and makes out with Topher Grace. She’s Miss Piggy, and this is 2015. And perhaps this new series is aiming for an older audience.

When the show debuts on Sept. 22, the choice to let kids watch will ultimately be up to the parents, and ratings will decide if the show stays on the air. If anything, this outrage will probably make more people want to tune in.

But 1MM took credit for getting Sex Box off the air, so you never know.