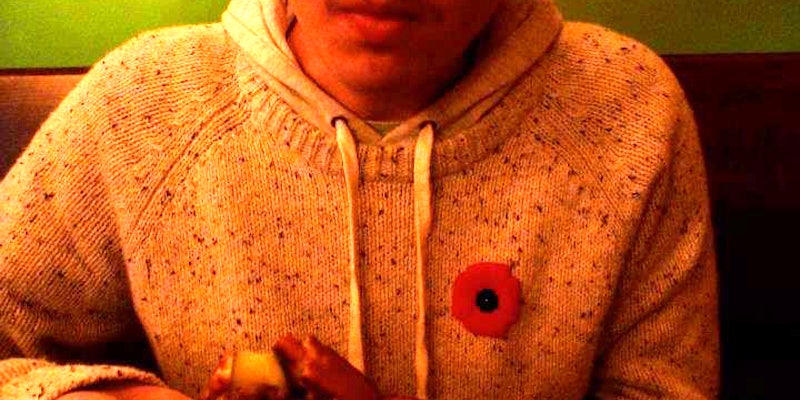 @boring_as_heck makes you laugh by pointing out the absurd

@boring_as_heck doesn't make up these posts. He just points them out to the masses—and they love him for it.

If you’ve ever been on Twitter and Facebook, chances are you’ve seen dozens, if not hundreds, of people desperately trying to be funny.

But for 22-year-old Stefan (@boring_as_heck) being funny isn’t about making clever jokes. It’s about pointing out the strange, depressing, and often stupid things people write on the two biggest social networks around.

Stefan, a student from Vancouver who declined to use his last name, is the creator of Corporate Twits and Old People Writing on a Restaurant’s Facebook Page, two Tumblr blogs that feature real screengrabs of hilarious Facebook posts and tweets posted on business-run Twitter accounts and restaurant pages.

“People posting about their dead cats on the Facebook page for The Cheesecake Factory is pretty sad,” Stefan told the Daily Dot, referencing a Facebook post.

“But honestly, all the best stuff on the Internet is sad and weird as hell. So a guy posting about his dead cat on The Cheesecake Factory’s wall is actually pretty standard.”

“@boring_as_heck no announcements have been made but we’ll keep you posted if that changes,” tweeted JetBlue.

The unexpected response was all the inspiration Stefan needed to get the blog started.

“When a question like that gets answered seriously, you think to yourself, what won’t these accounts acknowledge? I mean, if you look at the early entries on Corporate Twits, they’re all tweets—but now, most major corporate Twitter accounts will just ignore ridiculous questions, so we’ve had to move on to Facebook. I think it took a little while, but major brands figured out that maybe responding to complaints from guys named @dogboner or @fart wasn’t the best idea.”

Since then Stefan has posted more than 90 hilarious interactions he and other tweeters have had with business-run Twitter accounts. He’s also collected 2,800 followers along the way and a few detractors.

“Nobody’s complained yet, but I’ve been blocked by KFC and Taco Bell [on Twitter],” Stefan said. “Probably my favorite corporate account would be whoever runs the Carl’s Jr feed.”

Capitalizing off the success of Corporate Twits, Stefan started Old People Writing on a Restaurant’s Facebook Page Monday and has already amassed 4,900 followers, thanks to an impressive 85 posts. And like Corporate Twits, none of the posts are doctored or fabricated.

“I knew it would end up getting a decent following, just because pretty much everybody who follows me likes that sort of thing,” he said. “It’s just so pure, I guess. Just weird people posting weird things on corporate Facebook pages. It’s a really simple concept, but I think the best concepts are usually the simplest.”

Stefan again put that credo to work Monday after he retweeted a handful of messages from tweeters who did not realize the sinking of the Titanic was a real tragedy. The tweets caught one Tumblr user’s attention whose screengrab of Stefan’s retweets collected more than 23,000 notes. The whole episode inspired MSN to call Stefan a “prolific tweeter.” (See below.)

“With the Titanic stuff, everywhere you look on Twitter you’ll find something really, really stupid. It’s basically like having access to everybody’s Facebook statuses,” he said. “So people openly post really dumb stuff and assume that nobody is going to see it, when, uh, that’s kind of the whole point of Twitter, I thought? The reaction was cool, but all I really did was retweet a bunch of stupid kids, so it was surprising to see it take off like it did.”

“LOL this is funny as fuck,” commented justastorytotelll, who also reblogged an image of a woman complimenting Burger King on its fresh ingredients.

Stefan isn’t sure where Corporate Twits or Old People Facebook will go from here but is happy knowing his comedic endeavors hasn’t rubbed his family the wrong way.

“They’ve always been really encouraging with whatever I’ve done, and they love all my Twitter stuff. So it’s not like I have to hide any of it from them, which is nice. I’ve tried stand-up a few times, and it’s really fun, but it’s just so different from any of the things I do on Twitter or Tumblr. I would love to write comedy, definitely. Performing it is just a whole different thing, but I want to get better at it.”