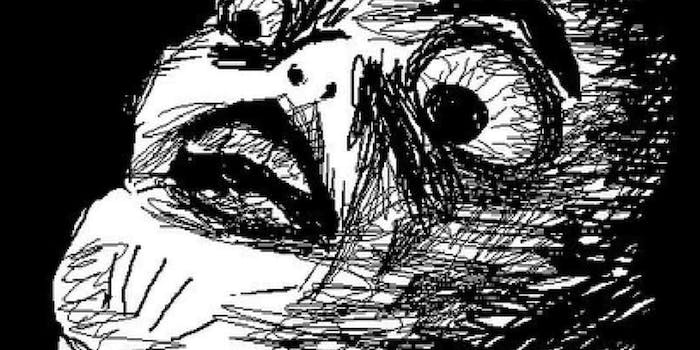 A redditor has discovered how to insert rage faces into Facebook chat.

A few years from now a large subset of Web users may only speak in rage faces.  And now, it appears that Facebook is speeding up the adoption of the comically ideographic language.

As one reddit user discovered on Christmas eve, Facebook users can now add rage faces to the social network’s chat client.  “No shit,” redditor Sky_Prodigy noted in the title of his thread, “I’m being serious.”

The redditor attached a screen capture of Facebook chat in action, showing a stack of rage faces: from F*ck Yeah Guy to Me Gusta Guy to Okay Guy.

Rage faces—in case you’ve been living under a Web-culture rock for the past couple of years—are stick-figure faces that portray specific emotions or reactions. They’re used in user-generated comics, called rage comics, to easily express an idea or situation. (They’re kind of like the next step in the evolution of the emoticon)

The comics got their start on image board 4chan, and have since become a mainstay of Web culture. Reddit’s rage comic forum, r/fffffffuuuuuuuuuuuu, features hundreds of user-generated comics every day, and boasts more than 330,000 subscribers.

To make the faces pop up in Facebook chat, you’ve just got to type the right combination of numbers. We’re not sure how Sky_Prodigy discovered the rage face codes, but we tested them out and everything worked swimmingly. And thankfully Redditors, as they’re wont to do, weren’t content with just the few codes listed by Sky_Prodigy. They dug up the codes for 23 different rage faces. You’ll never have to type out your emotions again!  Just copy and paste those numbers, and save your self from any and all inconvenient textual communication. 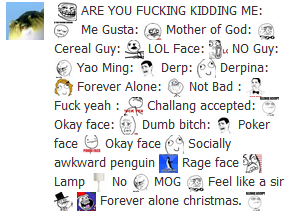 Here’s the full list (make sure to include the double brackets on both ends of the number sequence):