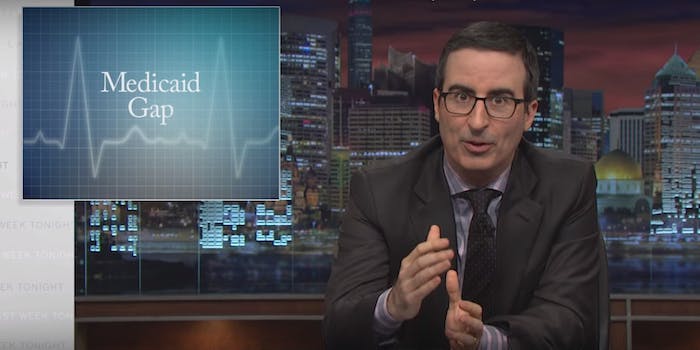 Some states are playing politics with people's health.

With characteristic poetry, John Oliver has found a way to compare health insurance to a pair of gym shorts that aren’t quite big enough to cover your junk.

He is, of course, referring to the “Medicaid gap.”

Although the Affordable Care Act (aka “Obamacare“) expanded health-insurance coverage, it left some people in a difficult position: too poor to qualify for Obamacare’s health insurance subsidies but still earning slightly too much to qualify for Medicaid.

The law’s plan was to expand Medicaid until it covered everyone who needed insurance, and in many states, that’s exactly what happened. But twenty states opted out of the Medicaid expansion because their elected representatives disapproved of the idea on principle. As Oliver explained, this left more than three million people without access to affordable healthcare.

The Medicaid gap is a solvable problem, but some people seem determined not to solve it.