What will Obama's people say?

When UFC fighter Nick Diaz tested positive for marijuana for a third time in his career, Nevada’s athletic board immediately suspended him for five years and fined him $165,000. Now, Diaz’s most loyal supporters are appealing to the nation’s highest authority for justice.

One outraged Diaz fan started a petition on the White House’s We The People website that asks President Barack Obama to overturn the Nevada State Athletic Commission’s ruling. The petition garnered the 100,000 signatures required to receive a response from the Obama administration with two days to spare.

As of early Thursday morning, more than 112,000 people had signed the petition. 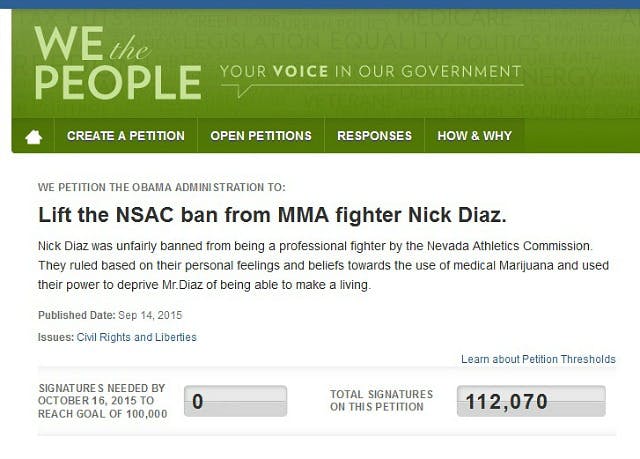 Some members of the Nevada commission wanted to ban Diaz for good.

As MMAJunkie.com wrote last month, “Commissioners Pat Lundvall and Francisco Aguilar pointed to Diaz’s two previous NSAC suspensions for marijuana, his no-show for a pre-fight test in California, and a 2010 brawl in the now-defunct Strikeforce as aggravating circumstances and supported a lifetime ban. After commissioners Anthony Marnell and Raymond ‘Skip’ Avansino expressed reservation with a lifetime ban, the commissioners agreed to a five-year term.”

Diaz’s supporters pointed to the report that Diaz failed only one of the three drug tests that were administered to him after his last fight in January (he gave three different urine samples that day, and they were sent to two different labs for analysis).

“It’s so not right for him to be suspended five years for marijuana. I’m against them testing for weed at all. It’s not a performance-enhancing drug. It has nothing to do with athletic competition. It’s only tested for political reasons. They say, ‘Oh, it’s only for your safety to keep you from hurting yourself because you’re out there.’ Why don’t they test for all of the other things that could possibly hurt us? … It’s so unfair if one person tests for steroids that could actually hurt a person and the other person smokes a plant that makes him happy and he gets suspended for five years.”

Diaz has a medical-marijuana license for California, but the drug is still prohibited for athletic competition.

The White House told MMAJunkie that, per We The People’s rules, it would respond to the petition within 60 days.

For now, though, Diaz is simply appreciative of his grassroots support.