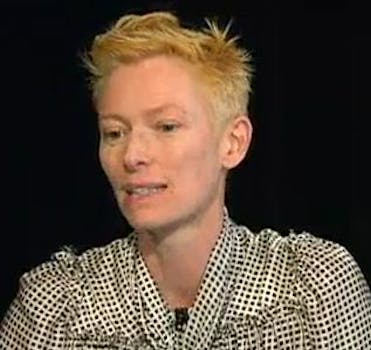 @NotTildaSwinton descends from her keep, talks Twitter, Oscars, and more

The tweets from this Tilda Swinton parody account border on Twitter genius. But in an interview with the Daily Dot, the account's owner wasn't ready to reveal his or her identity just yet.

We need to talk about Tilda.

The impossibly high-cheekboned Tilda Swinton is articulate, erudite and loquacious. And if the new parody Twitter account that bears her name is any indication, she’s also a little peculiar.

The parody has become the talk of Twitter over the last few days, with tweeters variously describing her as “delicately impenetrable,” “one of the best fake celeb twitters,” and “best at Twitter.”

The Swinton impostor has posted just 150 tweets since Monday but has already amassed more than 23,000 followers. It probably helps that those tweets are often bitingly funny and also provide thoughtful—if slightly ethereal—commentary on Shakespeare plays, fashion preferences, body modification, and her deep connection with nature.

The account’s received attention from the likes of Patton Oswalt, long-running Jeopardy champion and hilarious tweeter Ken Jennings, and geek blog Boing Boing. We swapped some emails with “Swinton” and, while she’s keeping mum on her real identity for now, she did talk about Twitter, her acting peers, and what really went down at the Cannes Film Festival (which she may or may not have really attended).

We’ve also rounded up some of the best tweets so far in a Storify.

I have a shelf.

DD: What do you make of all the attention on Twitter?

I can do naught but to send out the messages I feel. If they are received, I am glad. They seem to resonate, perhaps because today’s world of connected disconnection breeds a craving of intimate speech.

DD: How was Cannes this year? What are your most memorable moments?

I did not visit Cannes this year, there was a scheduling conflict with the Summit of The Æther. I sent my Theremiah in my stead. His shapeshifting is still not perfect, but luckily it was convincing enough for the drooling media-soldiers.

DD: Working with Bill Murray is an ambition for many actors. How did you find acting alongside the curmudgeon in Moonrise Kingdom?

I do not understand nor respect the idea of ‘working’ specifically with a person. We are an undulating film upon the surface of the earth, and everyone affects every other person in untraceable and unimaginable ways. However, it was quite challenging working on Moonrise Kingdom, simply because, as is common knowledge, Wesley Wales Anderson is simply an astral projection of myself. It caused me much stress to keep him corporeal while simultaneously acting.

DD: What was it like creating the Candy magazine cover photo?

I find the camera to be both useful and limited. Some people believe a picture can steal your soul, I simply believe one’s soul cannot fit on a negative strip or memory card. For the Candy magazine shoot, I sat curled in upon myself for two and one half hours. With a feral scream, I unfurled, focused on concentrating as much of myself into the lens as possible. The results I am happy with. I was naked at the time of the shoot, all the ‘clothing’ and ‘make-up’ you see in that picture is the response of the lens to a focused soul.

DD: What were the biggest challenges you faced while making I Am Love, and how did you overcome them? On that note, do you plan to send tweets in Italian?

I felt no challenge. All stories have happened or are happening, and when I act I simply skim over the consciousness web of the Earth, find the person who is, knowingly, or unknowingly, my character, and absorb them and reflect it to the lens. I doubt I will be tweeting in Italian. To speak it, I simply ported my language through the brain of a close personal friend, Silvio Berlusconi, who I’ve known ever since I cured him of his lycanthropy at the age of 16. (Unfortunately, it seems he’s found it hard to shake some of the more “carnal” side effects.)

DD: When you aren’t tweeting or being better than everyone else on screen in a film, how do you spend your free time?

I try to float in the water of my reflection pool for twelve to thirteen hours a day to keep my mind permeable.

DD: From where do you draw inspiration for your tweets?

Most simply come to me while I am in my reflection pool. Some are whispered to me by Theremiah, either from his own psyche or by the suggestion of friendly animalia.

DD: From where do you send most of your tweets? Are you likely to take your tweets on the road, as with the mobile cinema?

As I’ve mentioned, I type my tweets on a rabbit, Cerou, who has a unique connection to the World Wide Web. I foresee no road travels. This is a connection of mind, not of flesh.