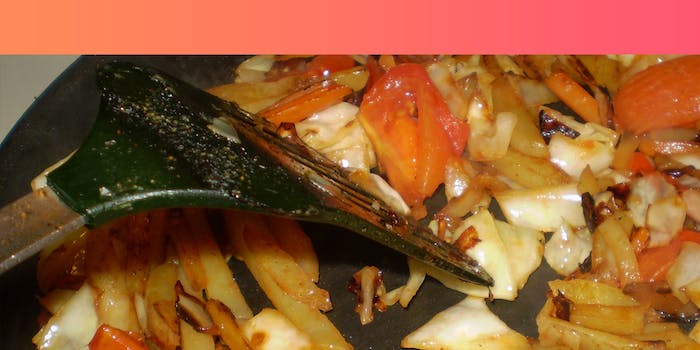 Taking a look at Nom, the livestreaming site for foodies

Does the world need a food-only livestream app?

If you bake it, they will come.

At least that’s the hope behind Nom, the newest digital video startup that seeks to combine the budding arenas of live videos and social food content.

It’s hard to miss social food content in your Facebook feed. Many of the site’s top video producers are food projects like BuzzFeed’s Tasty series, quick social videos for recipes and eye-catching food prep. Food is a human universal, and the digital numbers prove even just watching food is a hit online just like it’s been on TV cooking shows for years. With the rise of live apps like YouNow or Meerkat, live video is also having a moment in the digital landscape, but no one has combined the two—until now. YouTube cofounder Steve Chen and former YouTube engineering lead Vijay Karunamurthy decided to take that leap with Nom, which launched this weekend at SXSW.

Nom is entering a crowded space, since other apps or platforms can just as easily house cooking content the same way they livestream music or comedy content. Their argument is that Nom provides an interactive component, as well as eventual two-camera support, so producers can focus on both food and the host at once, something that’s not as essential in other forms of livestream content.

On the Web, the Nom experience feels flimsy so far. Videos are shot vertically for a mobile experience, so online streaming is dominated by black bars and an interface that sets the comments sections way off to the side. But Nom shines on mobile, where a smaller screen lets viewers more easily ignore the grainy quality. It’s also easier to hop into the streaming comments sections and interact with the hosts—everything from offering suggestions and asking clarifying questions to showering them with likes as finished products are revealed. For users who are used to other livestreaming apps, Nom will be an easy fit.

Polished food content this is not. The images that lead you into their featured streams have the shine of a highly produced food blog, but once inside, it’s the same production quality as any livestream service like Periscope, shot on phones or computer cameras, sometimes cutting off heads in search of the plate.

The content on Nom’s main page promotes streams from established foodies like Hellthy Junkfood, who spent Tuesday making Oreo cookie ice cream cones in a quick 28-minute segment, as well as users who are jumping into the service and streaming their home kitchens. Restaurants are also getting in on the action, streaming things like live shots of the pass, where food comes from the kitchen to the servers. Content lives on in archives for those who missed the live experience.

Some streams stay focused on a single cuisine or style, like Taste of Persia, who teaches Persian recipes. Also on Tuesday owner Chef Linda prepared Persian Halva in preparation for Persian New Year in a few weeks. While the lesson was interesting, watching a closeup of grains browning in a pan isn’t must-watch programming.  There’s a reason that food content evolved with camera cuts and magical pre-prepared meals that pop out of the oven to elide the cooking time. Instruction is great, but sometimes we just want our food porn fast and easy. If Nom can find a way to tap into that, it’ll be golden.