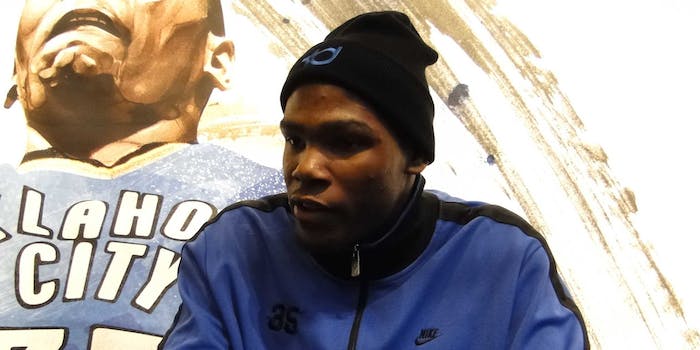 Oh no, the Based God’s curse is real

Three years ago, Lil B tweeted, “KEVIN DURANT WILL NEVER WIN THE TITLE AFTER HE SAID ‘LIL B’ IS A WACK RAPPER.” He then launched “THE BASEGODS CURSE” which is, to the best of my knowledge, the only lasting curse in NBA history, as well as the most powerful.

Saturday night, at the end of the fourth quarter of Game 6 of the NBA’s Western Conference Finals, with a trip to the NBA Finals on the line, Kevin Durant took the ball at the top of the key and was in a position to give the Oklahoma City Thunder the lead against the San Antonio Spurs. When he tried to cross over his defender, he slipped on what may have been a wet spot on the floor. Everyone watching immediately thought the same thing:

Can’t wait for the lil b tripping KD gifs yo

The Thunder lost and were yet again knocked out of the playoffs—their third such departure in as many years.

There have been attempted curses before, but none as explicit as Lil B’s. Dan Gilbert, owner of the Cavaliers, famously pledged in a letter typed in comic sans after LeBron left his team that, “THE CLEVELAND CAVALIERS WILL WIN AN NBA CHAMPIONSHIP BEFORE THE SELF-TITLED FORMER ‘KING’ WINS ONE.” This was proven erroneous on June 21, 2012 when LeBron and the Heat beat—you guessed it—Kevin Durant’s Oklahoma City Thunder.

That was 390 days after Lil B tweeted his curse.

Gilbert’s curse was easily trumped by Lil B’s. Who knows what would have happened if LeBron hadn’t faced the cursed Thunder. Would he still be wandering the earth, a pariah of unclutchness?