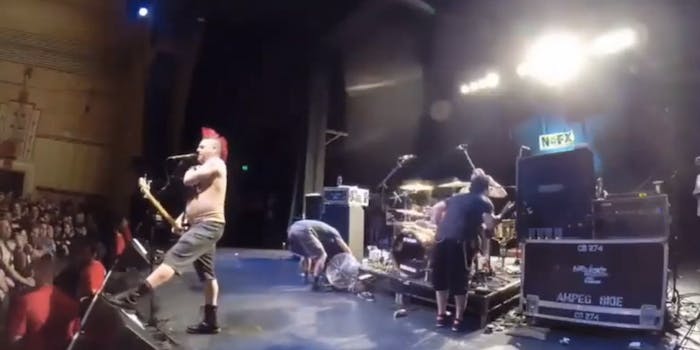 The NOFX kick to the head felt ’round the world

It's kinda poignant that the violence erupted during "Linoleum."

During an Australian show on Tuesday, lead singer and bassist of NOFX, Fat Mike, punched a fan resembling Hunter S. Thompson in the face, knocking him to the stage floor. He followed the strike with a swift kick to the head, hardly missing a beat in the band’s rendition of “Linoleum.”

The incident has resurrected a discussion that died in approximately 1998, that deep philosophical quandary of what is and isn’t punk. For Australians, jumping on stage is a tried and true tradition, and something that certainly wouldn’t rattle the sort of frontman that tricks audiences into drinking his urine.

@FatMike_of_NOFX punk? Get fucked. I’ve dove all over Josh Scogin at The Chariot shows, and never had a kick to the face.

Americans, however, remember a time when Dimebag Darrell was shot and killed by a fan that hopped onstage and are generally quicker to defend a quick and definite takedown of an overzealous man in a bucket hat putting his hands on a lead singer.

@FatMike_of_NOFX u shoulda kicked him harder. We don’t need to lose another legend on a stage because of dumb fans. #dimebag

But the talks of Dimebag, Australians, and what defines an Act of Punk are probably beside the point. Bottom line, Fat Mike had told the audience that night, multiple times, that he’d recently thrown out his neck, asking politely that they stop throwing so many beers at him, which, due to the Streisand effect, resulted in him being pegged at greater regularity with beer cans. By the time he felt somebody’s hands on his neck, the geopolitics of punk rock didn’t matter much. He was mad as hell, and he did as much damage to the perpetrator as possible before the wildly incapable security pulled the fan offstage.

However, all ended well enough between the fan and Fat Mike, thanks to Twitter, where the frontman and the busted-lipped fan shared this warm exchange:

@FatMike_of_NOFX thanks for the KO mike, didn’t hurt too much. Soz for creepin up on you like, punk shows are a bit different down here.

I’m sorry too Alex, I was in terrible pain all night. When you grabbed me by the neck I defensively reacted… offensively @alexanderpeterq

@FatMike_of_NOFX No worries mike, i completely forgot you mentioned your neck hurting, I was way too drunk.

Alex, if you go to the show on friday I’ll buy you a beer. Just don’t throw it at me alright?

It might seem poignant that this particular violence transpired during this particular song—”My closest friend, linoleum / Linoleum supports my head, gives me something to believe”—but this was a NOFX show; it would have seemed poignant no matter what was playing.