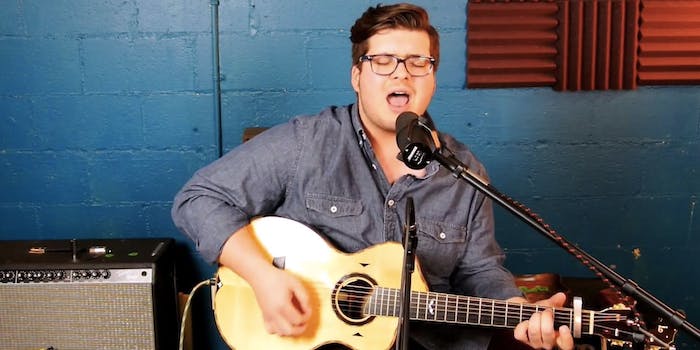 How one YouTube star found himself in the cast of ‘Glee’

Noah Guthrie didn’t intend to end up exemplifying a YouTube trend. As many of his fellow YouTubers were stretching their wings from the digital universe and becoming interested in making the jump to television by developing their own shows or joining pilots, Guthrie landed a plush gig on an already established network production mostly by luck and chance.

This fall, Guthrie joined the cast of Fox’s Glee as Roderick, a loner with the voice of a rocker, in its sixth and final season. But before he became TV star, Guthrie was already making waves on YouTube, thanks to his inventive cover songs and original music. He currently commands 421,000 subscribers on his only1noah channel, but Guthrie’s first brush with digital fame came several years ago, after his cover of U2’s “Where the Streets Have No Name” was seen by a researcher for the Ellen DeGeneres Show.

“They were trolling the Internet, looking for things for their website,” Guthrie explained. “They called my dad out of the blue; he didn’t answer it because it was unknown. I remember him listening to the voicemail and his face going from normal to the biggest grin he’s ever had in his life.”

After Ellen put his video on the site for a competition, which Guthrie subsequently won, he partnered with his first management company and started doing covers on a regular basis for the next four years. One of his biggest successes is a cover of LMFAO’s “Sexy and I Know It,” which landed him appearances on the Today show and Dancing With the Stars and clocked in more than 22 million views.

“That was one of those lightning in a bottle situations,” he said. “I hadn’t put a cover up in a couple weeks, and I was getting pressure from my dad to do it. I didn’t know what song I was going to do, but I had a blues riff in my head. I did it as a joke. It wasn’t what I wanted to do originally. It was one of the videos that didn’t take me 12 takes to do. Two takes and I was done. When I woke up, it was at 50,000 views. I thought that had to be a glitch. It never fixed itself; it kept going up.”

Now Guthrie is signed with Fullscreen to monetize his videos, and he’s trying to focus on what he’s doing as an original songwriter and artist, but that transition from covers to originals can be difficult.

“I find that’s the thing with most YouTubers,” he said. “You get pigeonholed into being a YouTuber. If that’s what you want to do, that’s great. I know people that finance houses off of YouTube. For me, it’s mainly about just being a musician in general. When my album came out in 2013, we put a few originals on [the channel]. Everyone loves it, and they’re positive. But it’s a whole new game plan, and you’re used to doing these covers. It’s a completely new system that you have to get down.”

That’s why Glee was a welcome project for Guthrie: It allowed him to push outside of the YouTuber mold while still keeping in the music world. Acting was never on Guthrie’s radar, but he was discovered while playing a house show in San Francisco.

“One of the guys that owned the apartment was also a talent judge for a lot of big talent competitions,” Guthrie explained. “He went to a singing competition the next day or weekend, and it was him on the judge panel and also a casting [associate] from Glee, Alex Newman. They’re watching people sing and catching up. Alex said they were having trouble casting this person for Roderick. They needed someone who’s kind of chubby, kind of shy, and has the voice of Otis Redding. This guy was like, ‘I just saw him last night!’”

After the Newman looked Guthrie up on YouTube, he contacted the artist and had him send in a tape of himself reading in his living room. Guthrie didn’t hear anything for a couple weeks, but then production asked him to fly out to Los Angeles to audition for Glee creator Ryan Murphy.

“He was great, but it was intimidating,” Guthrie said. “I met Robert [Ulrich, Glee’s casting director] and Alex beforehand and they told me: ‘We just want to let you know it’s going to look like they hate you, but they don’t hate you. They’re just thinking.’ I remember thinking during the audition, Ryan looked so stonefaced, and I was like, ‘I think he hates me.’ The next day I was getting on a plane to go home to South Carolina, and I got a phone call that I got the part. I went home for a day and a half and came back.”

Guthrie had been approached for TV before, but mostly in the form of singing competitions. He’d been considered for The Voice but decided to turn the opportunity down. Just a month later, Glee came calling, and he said yes.

“I even asked myself why I did that,” Guthrie said. “I think it’s because on Glee I’m playing a character. At the end of the day, I’m not Roderick. On The Voice or American Idol, you’re branded one way, and that’s you. At that time, it just wasn’t the right move for me. With Glee, it was the perfect thing I needed at the time.”

Guthrie joined Glee as part of a gang of new students populating a rebuilt club in the final season. In previous years, when Glee trie to introduce new high school characters, they were often met responses ranging from disinterest to flat-out dislike from the fanbase. Luckily for Guthrie, this batch was well-received, and Guthrie has gotten a lot of praise for his solos and his acting.

“[Acting] was never on my radar,” he laughed. “It just presented itself. It’s a completely new thing; it’s a different world. It was scary, and it was more about getting over the fact that I would have to put the music aside for just a second and do something completely different. I figured there are people all around the country and the world who would kill for an opportunity like this, and it was just laid in my lap. If I didn’t do this, I was not only stupid, I was a jerk.”

In addition to becoming close friends with his new Glee castmates, he’s also welcomed one as a collaborator on his YouTube channel. Broadway alum Laura Dreyfuss, who plays one half of a pair of twin cheerleaders on the show, dueted with Guthrie on a recent cover of Sia’s “Elastic Heart.”

“Laura and I really liked that Sia song, and we just holed up one night and made that song,” he said. “It was great. I love it. I haven’t had enough downtime to orchestrate anything else like that. I know now since we’ve done it, we should do something else. But we don’t have time!”

Glee’s grueling production schedule was a bit of departure from Guthrie, who was used to controlling his own time as a musician. Another departure was the dancing—a decidedly new experience for Guthrie.

“For the first five or so episodes, we didn’t have super hard choreography,” he explained. But “for these last couple episodes we’ve been shooting, it’s been full-out dancing for every episode. That was something in the back of my mind when we went to a dance rehearsal in the early part of the season. I think by the time we started doing the real heavy stuff, I realized you have to not care about how you look. The choreographers are my favorite people, because they’re so patient and so fun. The last month or so, with all the dancing, I’ve had so much fun. It’s something I never thought I’d do. But now when I’m having out with friends or at dinner, I find myself jiving to the beat. I would never do that before!”

Guthrie may have found success in the mainstream with a season of network television under his belt, but once he’s closed the books on Glee, fans can look forward to him returning to his online roots and churning out new music with his band.