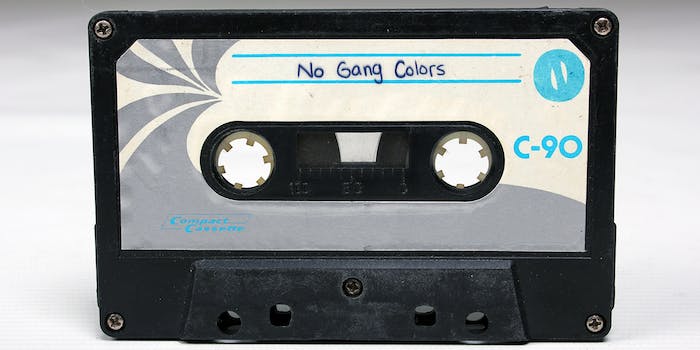 How No Gang Colors is chopping and screwing the Internet

Meet the producer behind the dankest underground raves that you can enjoy on your MacBook.

Ever since Napster nuked the music industry as we knew it, we’ve been struggling to put the pieces all back together—to balance art and commerce in the digital age. There are more questions than answers: How can musicians make money from the Internet? How can they use new distribution models to their advantage? Is the album still the ideal format?

Joseph Ohegyi, a Fort Worth, Texas-based producer who records under the name No Gang Colors, doesn’t claim to have it all figured out, but he’s using his music as a direct way to raise those questions, engage the conversation, and forge art about the struggle to make art in the 21st century. It’s hardly all doom and gloom on his end, though. His works also represent an optimism about the Internet as a vehicle for musical discovery and genre-bending, through sequencing that seems bizarre on paper but even weirder to live without once you listen.

Slave Face East, his latest release, experiments with the podcast format. Over some smooth guitar jamming, he pontificates on quite a few topics, including how the typical album-tour cycle is getting old, how artists are spoiled from “uncritical favor of their audience,” and how formats of all forms should be challenged. These topics tend to be more thinkpiece talking points than a basis for the actual music. By inserting himself in the music via his own thoughts—explicitly stated instead of wrapped in metaphor—he forces, or at least encourages, the listener to think about how they’ve consumed music, whether they’re old vinyl junkies or kids who are too young to remember Kazaa. He calls for artists to not see themselves as walled-off communicators who shouldn’t engage with critics or even their own audience but to realize that their work is open to interpretation, and to accept or embrace that.

For the project Ohegyi would record himself rambling and edit himself down. There’s hours of his own stuff that he didn’t use, and because the album leaned more on his own voice than samples, he found it to be an interesting challenge.

Letting go seems to be something that Ohegyi wants music listeners to do more of.

“It was more imagining me hearing it and what I would want to hear someone talk about music, sort of like a feedback loop,” Ohegyi tells the Daily Dot. In other words, he imagined the audience more when editing it down than when he was actually creating the raw material for it.

“This is interesting to me—does it have any context outside my brain, or does it jive with what’s going on right now?” he continues, referring to the editing process. “Even now, speaking I’m so self-conscious. There is an aspect of letting go that I had to embrace.”

Letting go seems to be something that Ohegyi wants music listeners to do more of. That’s touched upon in in East. “People who have an expectation and whatever isn’t falling into that expectation isn’t as good or is poorly done for them,” he says.

East features a lot of hard cuts and bits of sound coming in that almost compete with Ohegyi’s voice for attention. They reflect how much information competes for our attention and how relentless that can be. Ohegyi likes the “confrontational” nature that hard cuts can bring about, as a way of subverting his education from music school.

“I know what sounds good and I know how to do it; I just have a desire to not just do it because it’s pleasing,” he says. “To me, it’s pleasing, but to the general consensus of what works, I like the idea of subverting that even just a little bit here and there, just to keep it interesting for myself when I’m making it.”

East is inspired in part by Teo Macero, a jazz producer whose editing of Bitches Brew, On the Corner, and In a Silent Way was central to Miles Davis’s vision for a jazz-rock fusion. Editing is an art unto itself, and Ohegyi is crucially aware of this. He found that podcasts he listened to were a little too shaggy on the editing and wanted to approach his take on it like a detail-minded producer.

“I like that tradition of making music, it’s really tactile, even digitally,” he says. “I like the very simple process that editing involves, not to say that editing is simple, but the very basic nature that you’re dealing with sound, not dealing the with the specifics of how to get the sound.”

That sort of manipulation was also the basis for Hacking Heaven, his 2012 release that he considers to be his first “album” of sorts. He was inspired by the use of sampling in grindcore records and used that, in addition to field recordings of urban New York, to construct a narrative of how technology and art intersect. Whereas East takes on the podcast format, Ohegyi refers to Heaven as an “audio documentary.”

“I was interested in what something would sound like where the meat of it was from samples, not just using a sample as way to [say], ‘Hey, I like that move, or that sounds funny,’” he says. “Editing stuff to the point to where you’re bending it to make the point you want to make. Editing stuff down to crystallize these nuggets of statements, that put together, could make a contextual whole.”

East is more focused on Oygehi’s own literal voice, and Heaven is him taking in others’ voices to make his own, but both works are united by a need to prove the legitimacy of computer music. He had experimented with IDM when he was younger, but he felt that he was merely copying others and not doing his own thing. Control largely draws him to the digital format.

“There’s a lot of choices going into it. I think of every moment in the music as needing to prove itself,” Oyeghi says.

Just a few years ago, his was focus was on radical, abrasive remixing. 666 Mixes For Cash, whose title is a play on Aphex Twin’s 26 Mixes For Cash, was a collection of chopped-and-screwed grindcore and metal songs, combining them with rap samples and making them ready for the trunk. The standout track by far is “Money Screw Dead,” which repurposes the hypnotic, grinding industrial drums of Swans’ “A Screw” as the napalm-laden backdrop for Scarface’s anti-recruitment screed “Among the Walking Dead.”

Ohegyi remembers the rap-metal craze when the likes of Limp Bizkit and Linkin Park dominated the airwaves and MTV. He also remembers the backlash against all that stuff later—how metal and rap artists would rather be caught dead than be seen in the studio with each other. And frankly, most metal-rap collaborations tend to have a poor understanding of at least one side of the equation. So why does Cash sound heavy and natural?

While many have criticized peer-to-peer sharing as the root of destabilizing the music economy, there’s no denying that it’s allowed a kid who grew up in Connecticut find chopped and screwed music…

“Metal was made in this live band environment mostly; it’s hard to mix in rap stuff, which is always done in a studio,” Ohegyi says. “It can’t really use a live band making stuff then throw an MC over it or have some some DJ scratching, the process has to be organic to what rap would be, or else you sound like a hodgepodge combination of it.”

His mixes are a product of curiosity stoked by Internet-enabled opportunities. There are plenty of digital mixtapes out there, mostly saying “here’s what I like.” What separates his mixes is his ability to bring together wildly disparate forms and fluidly connect them.

The more music you listen to, the more you come to notice the similarities than the differences, and that spirit runs throughout his mixes. 2011’s Hellawayne IV, the last in a series of mixes (mostly) dropped on Halloween, is wild in particular, as Ohegyi is possibly the only dude who could make Three 6 Mafia’s Koopsta Knicca, noise artist Prurient, folk guitar hero John Fahey, Detroit’s most-hated Insane Clown Posse, and the death metal-gangsta rap fusion of Ice-T and Six Feet Under’s “One Bullet Left” flow seamlessly. While mostly centered on the loud and furious, he brings together many forms of heaviness as one expression of “this is the hard shit,” which is why the Hellawayne mixes still sound pumping.

Other mixes may not be as outwardly aggressive, but they are no less inventive. Tax Chronicle has a sample of That Metal Show host and general curmudgeon Eddie Trunk ranting about the hype cycle and rock radio’s stagnation over Friendzone’s “I Miss Y’all,” a weird lecture only Ohegyi could make feasable, much less entertaining. Warez Internet City, a tribute to Bay Area DJ Matthew Africa, who was killed in a car accident in 2012, is a dance party from the depths of Hades. Ohegyi corrals Araabmuzik, Antwon, and Prodigy, among others, for the dankest underground rave that you can enjoy on your MacBook.

Ohegyi credits obsessively seeking torrents, Soulseek, and rap blogs, in particular Cocaine Blunts and No Trivia (run by noted rap journalists Andrew Nosnitsky and Brandon Soderberg, respectively). While many have criticized peer-to-peer sharing as the root of destabilizing the music economy, there’s no denying that it’s allowed Ohegyi, who grew up in Connecticut, to find chopped-and-screwed music and figure out that sometimes, footwork does go great with some Beach Boys thrown in.

“Hearing all these things next to each other in my library… hearing it all juxtaposed together, you kind of wonder why it can’t all sit next to each other in a logical way,” he says. “What I try to do, in some context, is to try and make that stuff sit together in a way makes sense and feels right. It’s not like a Mike Patton thing—here’s the grindcore part, here’s the weirdo circus part—it’s all the same. It doesn’t have to be separated so much.”

Photo via stuart.childs/Flickr (CC BY 2.0) | Remix by Jason Reed