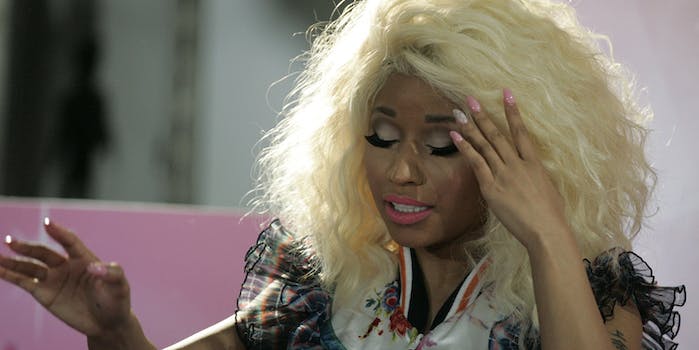 Nicki Minaj snubbed by her own high school

The Department of Education is already on the case.

Nicki Minaj, a rapper of some renown who at virtually any opportunity encourages her fans to stay in school and graduate, will not be allowed to speak to students at her alma mater, New York’s Fiorello H. LaGuardia High School, a performing arts institution.

Minaj tweeted about the snub yesterday, expressing shock and dismay.

I wanted to go back to my HS and speak to the students but the new principal declined. No need for me to inspire them, I guess. Smh

That school changed my life and I wanted to pay it forward to the students there now. I was really looking forward to it.

It’s a WOMAN. And not really > RT @JorianTM: @NICKIMINAJ wooow that’s so unfair. Did he give any reason why?”

Here, by the way, is Minaj on the subject of education in Marie Claire last year: “My fans send me pictures of their diplomas; the younger ones send me pictures of their report card. Whether I had this platform or not, I would be telling little girls and little boys, stay in school. Always depend on yourself.” Nope, definitely not a good role model. Too much twerking!

RT @redbaby5: DEAR @NICKIMINAJ, UR MY IDOL U INSPIRED ME 2 STAY IN SCHOOL N I DID & I FINISHED W/ A HIGH SCHOOL DIPLOMA I WILL NEVER B LAZY!

We called up Dr. Lisa Mars, the principal who declined Minaj’s offer, and, after enduring some predictable hold music—the theme from Fame, a 1980 film based on student life at the school—were able to leave a message with her secretary. We also emailed Dr. Mars and LaGuardia’s assistant principal, John Sommers, only to be directed to a spokeswoman at the Department of Education, which is already investigating this matter, per the Daily News.

She, too, proved to be unavailable.

Meanwhile, Minaj is retweeting proof of her positive influence on young minds:

“@MorganPnkPrint: Besides my parents, @NICKIMINAJ you are also the reason why I’m motivated to go to school everyday and not give up😫😘”

Nicki is honestly the ONLY person that motivates me to go to school. My parents don’t really push me like that…

Because of Nicki’s drive, I applied to two universities. Like I never thought I’d be at that point in my life.

I’m still in disbelief that the principal declined her visitation to motivate. Does she not know how much Nicki impacts this generation?

Yeah, I think I see the problem here—Nicki cares too much.