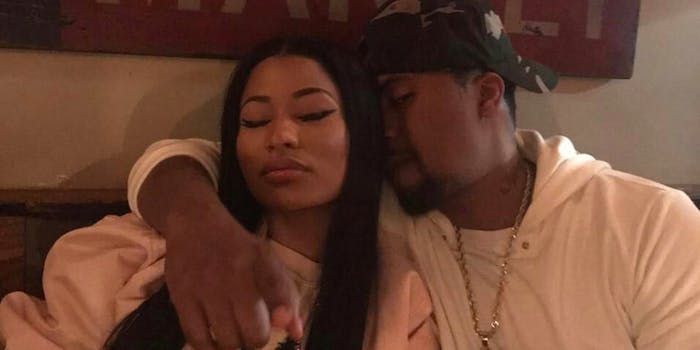 She might make an exception for a certain rap legend, however.

Nicki Minaj insists she’s celibate, though that might change because of her rumored boyfriend, rapper Nas.

Minaj swung by The Ellen DeGeneres Show, where she and DeGeneres exchanged jokes about her boob-baring look during Paris Fashion Week. Minaj also opened up about her relationship status on the talk show, after DeGeneres pointed out a suggestive Instagram post of Minaj and Nas.

.@NickiMinaj spilled the tea on her relationship with Nas. https://t.co/RzHaNm5H8a pic.twitter.com/3ujFpFhM2D

Although Minaj admitted to having sleepovers with Nas, she said they haven’t “done the nasty” yet.

“I’m just chilling right now, I’m celibate,” she said. “I wanted to go a year without dating any man. I hate men.”

Her Instagram feed suggests she might be about to break her own rule, though—which she acknowledged. “I might make an exception to the rule for him because he’s so dope,” she added.

While some folks on Twitter shared their support for Minaj’s celibacy, others felt her and Nas would make a perfect couple.

I'm so dead ass wrong. My favorite part of the interview was when she said she was celibate b/c she hates men LMAO

Minaj also recently won the praises of the internet when she announced her plans to help her Twitter followers pay for college.