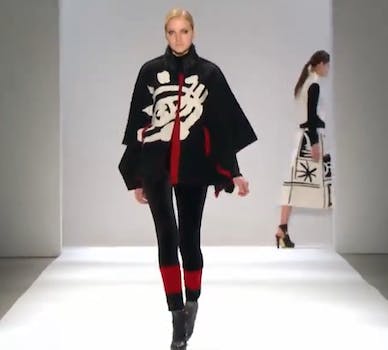 Several of the biggest names have yet to show, and they're available to livestream throughout the week.

Thanks to the snow storm that buried New York this weekend, watching Fashion Week from the comfort of your laptop is suddenly seeming a lot more appealing than being among the models and movie stars who have to freeze their extremities on the red carpet.

Not every Mercedes-Benz FashionWeek show is available online (this season, anyway), but there are still many to watch each day, including such big names as Vera Wang and Oscar de la Renta. If you don’t have time in your schedule for livestream viewings, we already have a few recommendations from the first couple of days of shows:

Kenneth Cole Collection
Following a seven-year break from live shows, Kenneth Cole’s Fall/Winter 2013-2014 collection was supported by a social-media blitz. As well as the usual Facebook and Tumblr publicity, Cole introduced a hashtag-based charity fundraiser for viewers online, and the models finished the show by Instagramming the audience on their way out. The clothes themselves were dramatic and urban, featuring relaxed menswear and womenswear in wool and leather.

Alexandre Plokhov
One for the Twilight fans. If you like your men dark, vampiric, and ominous, then this collection is for you.

Lacoste
Instead of displaying the kind of sporty styles one expects from the more accessible levels of this label, Saturday’s Lacoste show was icy and futuristic – and looked as if it were taking place inside a giant iPod. It’s Lacoste’s 80th anniversary this year, so perhaps they’re trying to look forward rather than focusing on their image as a manufacturer of high-end tennis gear.

Concept Korea
Rather than being a runway show for a single label, Concept Korea showcases five different Korean designers. The show is split into three sections on YouTube (starting here), and offers an interesting variety of styles that might otherwise not have made it to Fashion Week. Choi Bo Ko’s graffiti-like calligraphy designs (pictured above) were a real high point.

Monique Lhuillier
For fans of ladylike luxury, this show was a visual feast of fur, feathers, gold, and glamorously detailed floor-length gowns.

You can find a full list of livestreamed fashion shows here, running from 9am Monday to 8pm on Wednesday (all times Eastern). For angular, tailored womenswear, we recommend Ohne Titel at 1pm on Monday, but if you’re interested in a more Hunger Games kind of style, the Adam Lambert-endorsed The Blonds are on Tuesday at 9.30pm, and Betsey Johnson’s Betty Boop-esque designs are showing at 5pm on Monday – watch out for Betsey’s signature cartwheel at the end! Finally, if you’d like to take a look at what A-List celebrities will be wearing on the red carpet this year, look no further than Vera Wang at 11am on Tuesday, and Oscar de la Renta at 6:30pm.