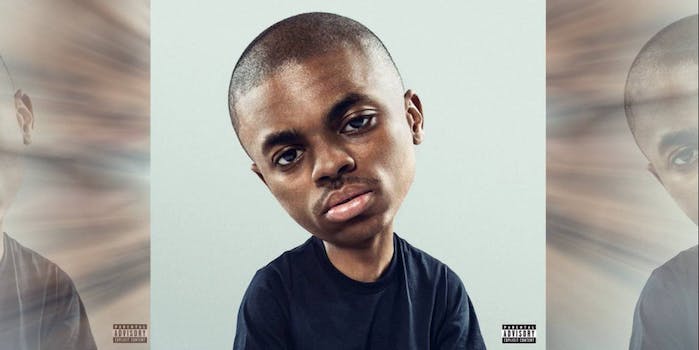 After multiple collaborations with fellow artists like Flume and James Blake, Vince Staples released his own EP titled Prima Donna.

Tracks like opener “Prima Donna,” and “Pimp Hand,” grab listeners’ attention instantly. The eponymous song is a rich offering setting the “IDGAF” mood. It transcends its eerie intro, slamming into a hard drop where Staples raps “watch a nigga get it” to a steady beat filled with thick bass, drums, and chimes. The chorus features a floating three-part harmony, bridging into A$AP Rocky’s verse and closing out with a hushed Staples mumbling “I just want to show you better.”

Prima Donna includes 6 tracks’ worth of rap ecstasy. With guest artists like A$AP Rocky and Kilo Kish, Staples’s follow-up to the 2015 LP Summertime ’06 hits just as many high notes as his righteous collabs.

Celebrating the one year anniversary of 2015’s E•mo•tion, Carly Rae Jepsen released a surprisingly phenomenal eight-track EP called E•mo•tion Side B. The mini-album is a Cyndi Lauper-esque ode to 80’s pop.

Standout “Cry” follows an unemotional man who is afraid to, well, literally cry. The song’s continuous beat paired with dark, luscious 80’s synth pop and bass claps sounds like something you’d hear on the Drive soundtrack. The chorus is more upbeat, however, with Jepsen harmonizing into a wispy high octave.

With release of E•mo•tion Side B, it seems Jaspen might be able to shake off her unsure days of “Call Me Maybe.”

Led Zeppelin graced us on Friday with the unreleased track, “Sunshine Woman,” unearthed from a previously lost BBC Session circa 1969. Over the past several years, fans have been reliving the iconic band’s glory days as more and more unreleased material has been released, along with reissued albums.

According to The Guardian, “Sunshine Woman” is “likely the best recording you will ever find of what might be the last previously unheard complete Zeppelin song to get an official release.”

The British group Rudimental released the new club anthem “Healing” on Friday. The dance jam track has actually made its rounds on DJ’s turntables like Calvin Harris and Roger Sanchez as a mysterious white label until Rudimental fully released it on Spotify, announcing ownership and allowing all to enjoy this catchy banger.

“Healing” features the soulful vocals of Jay Z‘s Roc Nation protégé J Angel, with a funky beat that leaves you craving more. The track is a deep house cut with tropical beats and ’70s disco accents that build up to a brassy, vibrant chorus.

Cary Ann Hearst and Michael Trent are heart-wrenching in their storytelling, backed by mandolin strums and the pair’s compelling vocal harmonies. The song is filled with emotion and beauty, capturing the passion behind Louisiana’s famous festivities.

This week has been full of really, really, long-awaited releases, and Chromatics give us a small reprieve will we expectantly await the forthcoming “Dear Tommy.” The upcoming album follows 2012’s enthralling Kill For Love and its eponymous single is certainly sets quite the scene.

“Dear Tommy” is as dark and mysterious as its music video, with swirling deep synths, gloomy electric guitar strings and slow bass claps. It’s all leading up to perhaps the most cinematic music yet for Chromatics. Here’s hoping we don’t have to wait too long for this blockbuster of an LP.