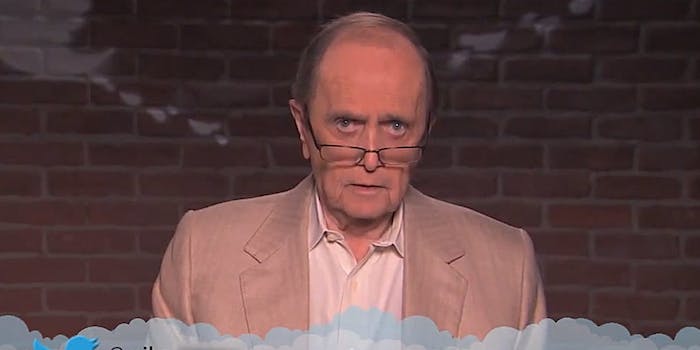 Just in time for Thanksgiving, Jimmy Kimmel Live has brought back one of his best recurring gags: reminding celebrities just how much people don’t like them. The late night host released an eighth edition of his wildly popular “Celebrities Read Mean Tweets,” and between John Stamos’ belly button and Lena Dunham acknowledging her nudity, it did not disappoint.

After opening up with someone asking Gwyneth Paltrow to shut the f**k up (it wasn’t ex-husband Chris Martin), Lena Dunham was left speechless for once when a Twitter user shared “unpopular opinion: lena dunham’s boobs are dog noses [sic].” Other highlights included Bob Newhart attempting to use Twitter, Michael Chiklis comparing himself to a scrotum, and John Stamos taking off his shirt to defend his ugly belly button. (In that case, Twitter was right, it is terrifying.)

While Kimmel has come under fire before for the potential veracity of the mean tweets in question (many mysteriously disappeared from Twitter, or didn’t exist at all), the show has now taken to lightly camouflaging portions of the angry tweeter’s handle with a barely noticeable blur, which could lead to mix-ups down the road. The tweet at Dunham in particular read from @julia after being camouflaged, but @julia is a now defunct Twitter account for well-known feminist entrepreneur and journalist Julia Allison—someone who likely doesn’t need or want to be linked to slamming Dunham for her body type.

Either way, “Celebrities Read Mean Tweets” remains one of the best segments on the notorious hoaxer’s show, and may we all take it with the giant grain of salt, and even more giant laugh, that Lisa Kudrow did when she got this gem:

“I hope you all have a great weekend. Except you, Lisa Kudrow. F**k you.”