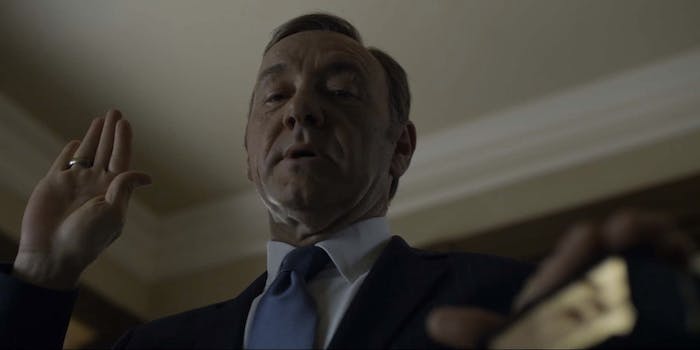 This ‘House of Cards’ season 2 trailer gets a little primal

Hunt or be hunted.

Hunt or be hunted.

That’s the latest tagline from Netflix’s runaway hit House of Cards, in a season two trailer released Monday morning. It’s only 20 seconds longer than a previous teaser trailer released in December that warned viewers the road to absolute power is paved with hypocrisy and casualties; direness continues to abound in the new season.

Season two sees oily Congressman Francis Underwood being sworn in as vice president, though things quickly devolve from there. Secrets are outed, reporters are threatened, ribs-slinger Freddy growls that “they stepped on the wrong motherfucking rattlesnake,” and inexplicably, a steak is thrown into a lavish swimming pool. (Maybe it was cheaper than a fake horse’s head mixed up in silk sheets?)

House of Cards season two hits Netflix Instant on Feb. 14, because nothing says Valentine’s Day quite like fear, loathing, and Congressional corruption.