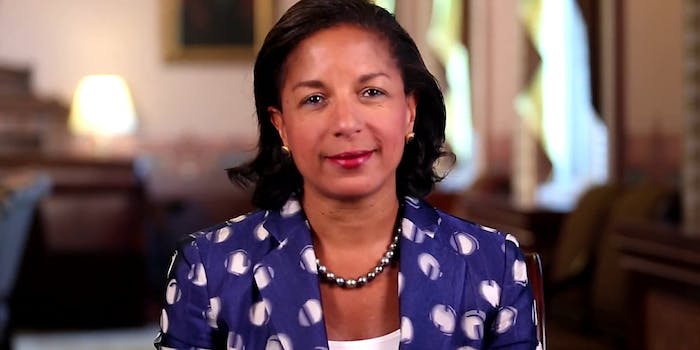 Netflix hires Susan Rice, and conservatives are leading a boycott

This is sending many subscribers over the edge.

On Wednesday, Netflix announced that it had hired President Obama’s former national security advisor Susan Rice to its board of directors, and conservative Twitter quickly led a charge to #BoycottNetflix.

Rice, who was also the former ambassador to the United Nations under Obama, will likely be helping Netflix with a global focus. Netflix CEO Reed Hastings said in the announcement: “For decades, she has tackled difficult, complex global issues with intelligence, integrity, and insight and we look forward to benefiting from her experience and wisdom.”

But many conservatives disagreed with that assessment, citing Rice’s involvement in downplaying the 2012 attack on the U.S. embassy in Benghazi. She was also criticized for “unmasking” the names of senior Trump officials collected in U.S. intelligence intercepts.

Many critics cited the fact that Netflix was reportedly in talks with Obama for a series (he appeared on the first episode of David Letterman’s new show) as even more proof of a targeted “propaganda” campaign. Many subscribers called for a boycott or canceled their membership.

Say NO to NETFLIX ‼️

Obama worked out a deal with @netflix to produce PROPAGANDA. Susan Rice was put on their board of directors.

Netflix has decided to appoint Susan Rice to their board of directors .
The same woman that lied on TV 6 times about a YouTube video causing the murders of 4 Americans ! @netflix still shilling for the Deep State like they did for Obama in the 2012 election #BoycottNetflix

People cancelling their Netflix subscriptions after finding out they hired Susan (Benghazi was caused by a YouTube video) Rice are hijacking the hash tag#MeToo I cancelled mine. #MeToo @realDonaldTrump

The perfect place for a former staffer who blamed a terror attack on a poorly-made short film released long before said attack took place. https://t.co/w8Qc1FQ1N3

.@Netflix doubles down in support of Obama corruption — compromised Susan Rice, who lied repeatedly on both Benghazi and the unmasking issue joins its Board of Directors. https://t.co/o727LHKGmT