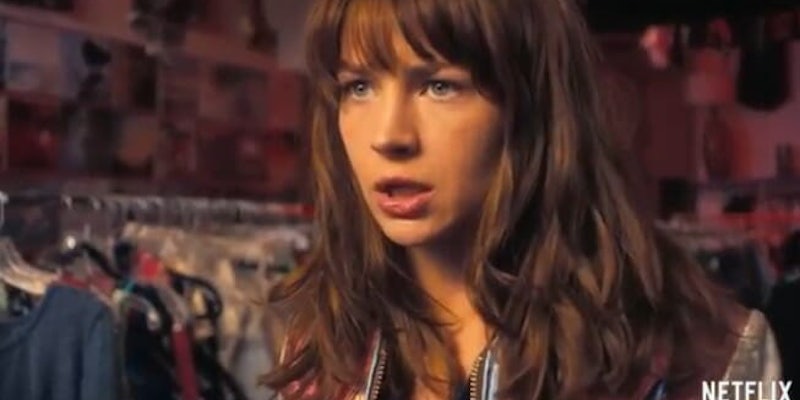 Screencap via Netflix US & Canada/YouTube

There’s a scene early in the first episode of Netflix’s great new series Girlboss where we smash-cut protagonist Sophia (Britt Robertson) and soon-to-be boyfriend Shane (Johnny Simmons) from a bar to a bedroom. Before the scene can fulfill its destiny as a total cliché, Sophia brings the action to a stop with “I’m done,” then “can I crash here?” It’s a perfect encapsulation of how the series tweaks the familiar enough to be rewarding.

Developed for Netflix and adapted from the best-selling Sophia Amoruso novel of the same name by Kay Cannon, Girlboss is a show that is abrasive and slyly charming. It is often both within the same scene. Cannon, whose credits include 30 Rock, New Girl, and the Pitch Perfect movies, delivers a potent mix of smart and silly comedy and pathos.

While Cannon guides the ship, it’s Robertson’s work in front of it that makes the show go. Robertson has appeared in mass-appealing fare like The Longest Ride and Tomorrowland. This departure into edgier material pays off. Sophia is the kind of know-it-all that everyone enjoys seeing get knocked around by life. She’s confident to a fault, with enough cracks in her armor to make her fragility uncomfortably relatable. She’s cut from the same cloth as Hannah Horvath.

But the show makes it clear Sophia is never as in control as she claims. The number of times she declares that she’s winning at life becomes a running joke in its own right. The aborted hookup in the first episode? It’s bookended by Sophia getting eviction notices and being on the precipice of homelessness. Desperate for rent money, Sophia scores with a miracle eBay sale, which keeps her sheltered and gives her gives her a sense of direction.

That taste of success refills Sophia’s confidence, but does nothing for her self-awareness. How you feel about Sophia will dictate your enjoyment of the series. The supporting cast is strong too, if underused. Simmons and Robertson have good chemistry, so the scenes between Sophia and Shane pop. Surprisingly little time is spent with the two so their scenes together stand out that much more. The two have an extended date early in the season that is one of the show’s highlights. The most satisfying relationship on the show is between Sophia and best friend Annie (Ellie Reed). They’re similar in their self-involvement and obliviousness to the plight of others, but an episode about a spat over Top 8 placement on Myspace (the show is set in 2006) and the origin of their friendship makes it clear how much they care for and need each other.

The show uses its stock of recurring characters sparsely and effectively. Dean Norris (forever Hank from Breaking Bad) plays Sophia’s loving but concerned father. Norris has a thousand-yard stare that is devastatingly effective. RuPaul’s weed smoking neighbor is a goldmine. Jim Rash (Community) runs a thrift store frequented by Sophia, and his deadpan weirdness is a tool the show uses judiciously. Melanie Lynsky, crushing it lately between this, Togetherness, and I Don’t Feel at Home in this World Anymore, plays the foil to Sophia in the vintage clothing world. The characters in Girlboss are linked together by the tenuous control they have over their lives. The coup of the guest stars, however, is Norm Macdonald as Sophia’s boss. The world needs as much Macdonald as it can get, and his bits here are savory.

Girlboss arrived on Netflix Friday with relatively little fanfare, at least as far as I can tell. It will be a shame if the show ends up buried under the streaming giant’s rapidly growing library. Cannon’s track record alone should engender some degree of trust, and if you’ve liked her past work you’ll enjoy Girlboss. In the vein of Louie, Girlboss is unafraid to go for long stretches with little to no comedy. Girlboss isn’t in the elite tier of comedy-drama hybrids like Atlanta, Girls, and a host of others, but among Netflix originals it’s close. Much like Sophia, the show has the potential to reach those heights if Netflix gives it more time.