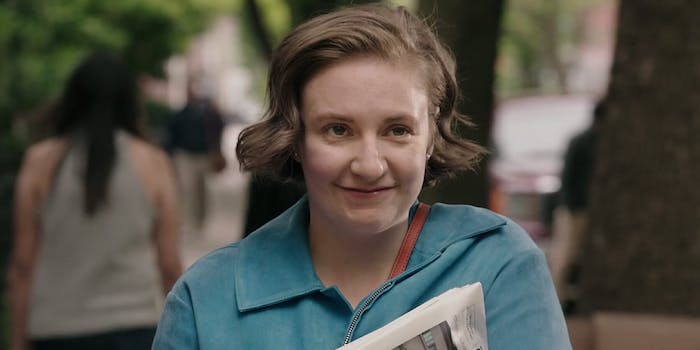 Flawed, complicated, and sometimes infuriating, 'Girls' mattered. In fact in all of its messy glory, it’s difficult to list many shows which have mattered more.

On Sunday HBO will air the finale of Girls, one of its most talked about, controversial, and important series. And while Girls was never its highest-rated show, it’s tough to think of another series in recent years which has had such resounding cultural impact.

Premiering in 2012 to waves of hype, Girls immediately became a lightening rod for equal amounts praise and criticism. No small part of this was influenced by the series’ wunderkind creator Lena Dunham, and her often contentious relationship with the media. Yet in the subsequent years since it premiered, Girls has faded from the national pop culture conversation. As better shows about similar subject matters followed in its wake, perhaps it became harder to remember just how revolutionary the series really felt when it premiered half a decade ago.

It’s time to give credit where it’s due. Flawed, complicated, and sometimes infuriating, Girls mattered. In fact in all of its messy glory, it’s difficult to list many shows which have mattered more.

“I don’t want to freak you out, but I think that I may be the voice of my generation,” quips Dunham’s Hannah Horvath in the show’s pilot. “Or at least, a voice of a generation.”

This is a pretty bold way to start off your series, especially when conventional wisdom is that Dunham was essentially playing a version of herself—despite evidence which suggests this interpretation is reductive. Putting the question of where Dunham ends and Hannah begins aside, it remains difficult not to see Girls as the first show on television which boldly tried to depict millennials as they actually are, warts and all.

Not everyone has been this diplomatic. In a piece called, “Why ‘Girls’ made us hate millennials,” the New York Post’s Jennifer Wright  insists that:

While the show captured a lot of what makes millennials funny—our reliance on apps and social media, our affection for some truly ridiculous fashion trends like overalls and tiny hats—it didn’t go very far in capturing what makes us a driven and socially involved generation… God, but for the days of Sex and the City. At least that HBO show made the behaviors of a generation of women seem glamorous.

Yet that’s exactly what was so significant about Girls in comparison to what came before it. The show wasn’t glamorous, it never has been. Despite frequent comparisons to Sex and the City (not to mention other shows about female friendship,) Girls instantly set itself apart by breaking down the fantasy which was such an intrinsic part of City’s appeal. If you think back to that first episode, you’ll remember that the show’s inciting incident is Hannah’s parents cutting her off financially; no giant Carrie Bradshaw apartments here. If City laid the groundwork for female empowerment on television, Girls picked up where it left off, proving that in reality empowerment isn’t always pretty.

“Each week, I aligned my experiences to those of the show’s characters accordingly, looking out for resemblances and disparities between the fiction and reality,” Pantazi continues. “The only thing that qualified me for the task was my being in the same demographic as the cast of Girls—the vague possibility that I could be Hannah Horvath.”

Wright and Pantazi are both correct. While often stereotyped, millennials, like any group of people, are too complicated to be just one thing. Yes, the characters on Girls can be almost unbearable at times, but this does not suggest millennials on the whole are unbearable too. Instead, Girls suggests that while our worst flaws do not define us, they are an important part of who we are. What’s been fascinating about the show’s later seasons is the way characters have found their paths, even while being unable to escape their worst qualities.

That’s not to say that Girls hasn’t made mistakes. While the actions of the characters are one thing, the faults of those behind the scenes are a separate issue. The show’s portrayal of race in particular has been consistently flawed, up through the final season.

“I don’t believe that people of color, sexual preference, or gender need to be shaken indiscriminately into every series like some sort of exotic seasoning,” wrote Kareem Abdul-Jabbar in 2013. “If the story calls for a black character, great. A story about a black neighborhood doesn’t necessarily need white characters just to balance the racial profile.”

Abdul-Jabbar also points out that during season 2, it “really seemed like an effort was made to add some color—and it came across as forced.”

Here we return to Dunham, the nexus of this criticism and an unstoppable opinion generator for matters both related and adjacent to her show. Many times the excoriations leveled against her have been fair. Whether claiming she wished she’d had an abortion, unfairly sexualizing Odell Beckham Jr., or making poorly phrased comments about her little sister, Dunham’s penchant for oversharing and occasionally not thinking before she speaks (or tweets) embodies—here we go again—what many see as the worst of millennials.

But like her characters, Dunham deserves credit for representing the positive sides of millennial life too. She has been a relentless advocate for mental health, feminism, and body positivity, despite that both on and off her show, her brand of advocacy hasn’t always gotten it right.

Maybe it’s easy to dislike or even hate Dunham. But too many people still dislike her for the wrong reasons. Because while much of the criticism surrounding Dunham has to do with her tone-deaf statements or her mishandling of representation, a lot of the anger directed at her still seems to stem from the fact that she is a successful, young, outspoken woman who has accomplished more in her field than most do in a lifetime. And if she was a man, we probably wouldn’t be having this conversation about her in the first place.

A recent Reductress headline read, “I Support Lena Dunham’s Right to Choose to Be Horrible.” The same might be said of the characters on Girls. Dunham and her show have come to represent a key narrative about coming of age in the world of now: We all make mistakes, but in these digital times, our mistakes get amplified like never before. As the original celebrity showrunner of the millennial generation, Dunham has proven that no matter how many times you put your foot in your mouth, it is your work ethic that will redeem you. As she once said about an unlikely ally, “I’m not gonna indict the work.”

Regardless of your feelings about its creator, Girls remains a stellar piece of television. As Dunham herself has said, people never talk about the show’s exquisite craft because they’re too busy focusing on its supposedly risque stances. But whether it comes to writing, acting, or directing, Girls has always delivered and occasionally exceeded on the high promise that comes with HBO. The show’s music selection alone is a perfect balance of indie and pop. (Rihanna, Ariana Grande, Icona Pop, Ellie Goulding, Robyn, Beck, Belle and Sebastian, St. Vincent, Andrew Bird, and Grimes all spin during iconic and key moments.)

Girls has likewise influenced a generation of prestige TV, paving the way for: Broad City, Transparent, Looking, Insecure, Orange Is the New Black, BoJack Horseman, Crazy Ex-Girlfriend, Atlanta, Fleabag, Crashing, Love, Search Party, and Master of None. Whether it was redefining what complex portraits of young people look like, examining the idea of “likability,” expanding our conception of what women can be and do on TV, or navigating the space between creativity and narcissism, Girls set the template for the current television landscape in a way few other series from the recent past can claim.

Stop debating, Girls mattered. Though it was controversial to the end, its greater accomplishment is that it became one of the best shows of all time by changing the face of television in exactly the way its creator intended it to.

In her original pitch for HBO, Dunham wrote that, “[B]etween adolescence and adulthood is an uncomfortable middle-ground, when women are ejected from college and into a world with neither glamor nor structure.” She concluded her mission statement for the show by writing that these women are, “my friends and I’ve never seen them on TV.”

They’re on TV now, and thanks to Dunham and Girls, it’s hard to imagine a time when they weren’t.