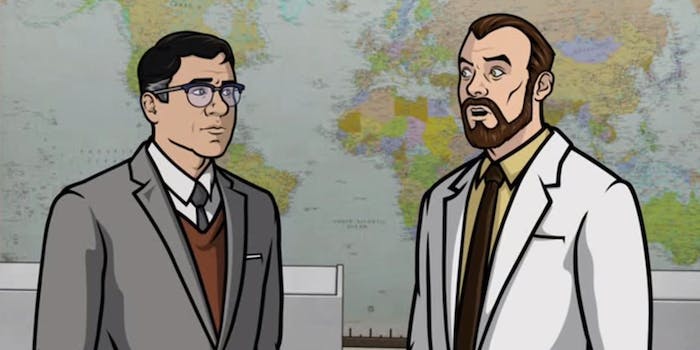 9 comedies you should be binge-watching on Netflix right now

This year, skip the cliché resolutions and take a seat on the couch.

With the ball dropped, Champagne popped, and a few verses of “Auld Lang Syne” sung, the year that was 2014 has officially been committed to the history books. With another 365-day trip around the sun ahead of us, it’s time to begin the sobering task of plotting out a plan for self-improvement known as a the dreaded New Year’s resolution.

How will you improve yourself in 2015? More trips to the gym? Join a book club? Stop spending hours staring into the self-obsessed vacuum that is social media?

This year, skip the cliché resolutions and take a seat on the couch. Instead of standing in hourlong lines at the gym just to grab a spot on the elliptical, commit that time to streaming the series you’ve been putting off for so long. While we’re not necessarily encouraging slothfulness, here at the Daily Dot, we believe that transformation flows from the inside out.

To start you on your journey to culturing yourself and broadening your horizons, some of our writers have shared their favorite comedies available to stream on Netflix and their reasons for encouraging you to waste your time watching them in 2015. So get comfy, grab some popcorn, and get ready for some hardcore binge watching.

Tina Fey’s time at Saturday Night Live left us with so much more than an indelible Sarah Palin impression and snarky jokes delivered from the Weekend Update desk. During her time as the show’s first female head writer, Fey managed to gather enough fodder about wrangling actors and being a working mom to set out on her own into the world of sitcoms. With Fey playing hapless comedy writer Liz Lemon working at 30 Rockefeller Plaza, the world of 30 Rock lives somewhere in the hilarious hinterland of autobiographical and absurd. But don’t mistake this comedy for a show only about farting robot sketches. Thanks to sharp but heartfelt writing, you’ll find a few tears mixed in with the laughter, and you’ll wish you had a mentor with as thick a head of hair as Jack Donaghy. —Greg Seals

Described by series creator Adam Reed, who also writes every episode, as “James Bond meets Arrested Development” with an especially “dickish” Bond, this animated FX comedy could be mistaken for Seth MacFarlane’s latest assault on good taste. But the voice talent, led by Jessica Walter, Aisha Tyler, Chris Parnell, and the peerless H. Jon Benjamin, imbues goofy spy-thriller plotlines about diamond heists and space pirates with genuine character. Archer himself is an idiot savant you can’t help but love, even as he drives his co-workers insane. Sure, it’s totally sophomoric—but why should 13-year-olds have all the fun? —Miles Klee

We’ve seen our fair share of family sitcoms, and we’ve also seen plenty of animated comedies about families (especially on Fox). But what makes Loren Bouchard’s Bob’s Burgers stand out? For one, the characters like each other, which is partially why Tina Belcher in particular has been so refreshing to watch, both as a teenager going through puberty and a growing feminist icon.

It follows Bob Belcher, owner of the struggling, titular restaurant, and his family (wife Linda and kids Tina, Gene, and Louise) in their small Jersey shore town and the many shenanigans they get into. The constant gags are ripe for multiple generations; look no further than Gene’s portrayal of his father for some insight. Come for the beef and stay for the special ingredients.

The worst part about Bob’s Burgers? The show is in its fifth season, but you can only access three of them on Netflix. We’re already refreshing our feeds for season 4. —Michelle Jaworski

Thanks to childhoods packed full of Saturday morning cartoons, most Americans have been laughing at animation for as long as they remember. From grand sight gags to wild physical pratfalls, animated series often draw the biggest laughs because of the improbability of their comedy. But what sets BoJack Horseman apart from the rest of its animated brethren isn’t over-the-top set pieces, but the harsh reality this washed-up actor, who happens to be a horse, lives in. The Netflix original series, free from the FCC confines of network television, finds this once famous sitcom star exploring all his demons in hilarious detail as he tries to regain some semblance of a career. While there’s some real pain at the show’s core, a generous coating of comedy delivered by all-star voice talent makes it more digestible. —Greg Seals

Gilmore Girls does not start off at the breakneck speed of something like Breaking Bad or Orange Is the New Black; then again, it’s not supposed to. But rest assured, if you give this show even a little bit of your time, it’ll quickly come to charm you. By now, you’ve probably already heard about its supremely witty dialog, which goes at lightening speed and is full of “blink and you’ll miss it” pop culture references. But the real heart of the series is its characters, particularly the female leads, who are among the best-written for television ever.

The show falters a little bit in its latter years, with some unsuccessful creative decisions, and the departure of creator/showrunner Amy Sherman-Palladino before the seventh and final season. But it’s still worth sticking with, right through the satisfying finale.

In short, there have been a dozen dark, brooding, male antiheroes to emerge on television over the last few years. But there’s only been one Lorelai Gilmore. [Editor’s note: Well, technically two.] —Chris Osterndorf

This one’s a love-it-or-hate-it sitcom, and the people who hate it are wrong. The basic pitch here is the pettiness of the Seinfeld crew, multiplied by the rancid squalor of a Philly dive bar. Between getting hooked on crack in an attempt at welfare fraud and filming knockoff sequels to the Lethal Weapon franchise, the gang takes every opportunity to screw one another over. Featuring a timeless underdog in rat-bashing janitor Charlie Kelly (Charlie Day) and a sublimely grotesque turn from Danny DeVito, introduced as depraved patriarch Frank Reynolds at the outset of season 2, the series hasn’t dulled a bit in its decade on the air. —Miles Klee

It took comedian Louis C.K. more than a few attempts and a lot of life to suss out just what he wanted to say in a show. But after a failed HBO sitcom, countless standup specials, and raising two girls as a single dad, the comic seems to finally have found his voice with this FX sitcom. While the budget might be small, the message is big, and he masterfully captains his own ship as the writer, director, and star of Louie. Between getting ditched by blind dates in helicopters and driving a speedboat to the middle of the ocean to avoid seeing his father, the show excels when grand set pieces serve a single joke. With an art house episode that ends in a single minute-long fart, it’s clear the comedian has finally found enough bravado to mix high-minded concepts with low-brow jokes. —Greg Seals

8) Orange Is the New Black

The show that solidified Netflix’s place as a titan in original programming, Orange Is the New Black has already achieved a cultural significance that’s been discussed at length, and to be sure, it is a deeply important show, given the times we live in; its very popularity is a minor victory in and of itself. But none of that would mean anything if Orange wasn’t also so ridiculously entertaining. The women’s prison drama picks up steam quickly, and doesn’t let up for most of the entire first season. The second season, which arrived earlier this year, isn’t better or worse than the first, but rather more of a fitting equal. It builds on the strengths of the first one, making the stories and the characters richer and more human, with a skill few shows ever achieve. —Chris Osterndorf

Artful, dark, and a bit avant-garde, this hate-letter to childhood can be a daunting effort at first. Stick with it, though, and its bizarro world will start to make a fiendish sense. Ever wonder what happened to the boy adventurer of your favorite Hanna-Barbera cartoon? Well, he’s still dealing with ridiculous supervillains—our chief antagonist, the Monarch, is the funniest TV creation of the 21st century—but now while trying (and failing) to raise doomed sons of his own. Amid all the zany superpowers, magic, sci-fi, and exotic locales, there’s a poignant gloss on daddy issues and the death of innocence. Nostalgia ain’t what it used to be! —Miles Klee