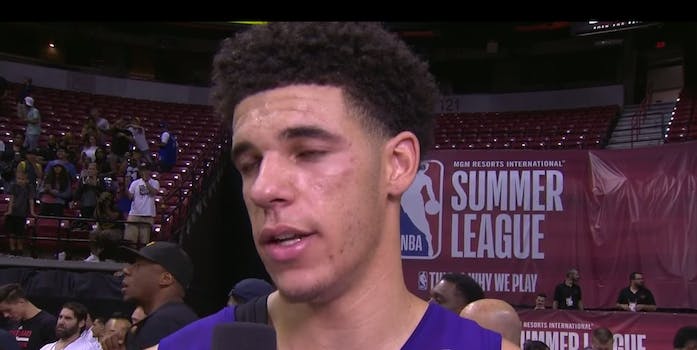 In his first appearance on the hit NBA 2K basketball video game franchise, Los Angeles Lakers rookie Lonzo Ball seemingly got a little more exposure than he probably expected. As revealed by YouTube user Dre Wonders this week, an apparent glitch left the standout former UCLA point guard shirtless in the upcoming game’s box score menu, a glaring oversight for a young player who already has his own branded line of merchandise.

From the looks of things, the glitch was present both in Ball’s out-of-game box score image and in an in-game performance update. In both cases, a hunched-over digital version of Ball was shown shirtless “nipples and all.” You can see the glitch in the video below, although be warned, it includes some decidedly NSFW language.

NBA 2K18 is due to be released to the general public on Sept. 29, but people who pre-ordered the game got it a few days early. That’s how this footage of the Lonzo Ball glitch made it to the internet now rather than next week. Presumably, this means the 2K team has been made aware of the problem, so it wouldn’t be a surprise if it’s fixed by the time the game actually drops in stores and on the digital download markets.

Despite nominal competition from the NBA Live franchise over the past several years, the NBA 2K series has had a dominant grip on the basketball video game market throughout the last decade, and this year’s iteration is widely expected to continue that run.