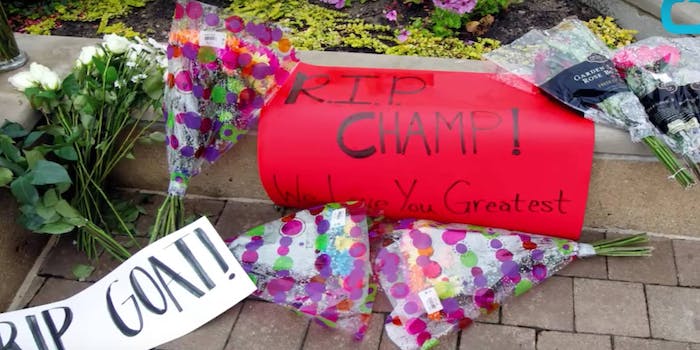 'Service to others is the rent you pay for your room here on earth.'

The city of Louisville, Kentucky has come together to honor Muhammad Ali in stunning fashion.

Ali passed away on Friday night at the age of 74. Though the news came late in the evening, mayor Greg Fischer quickly issued a statement of condolences that night and stated that flags would be lowered to half-mast the next day.

Fischer went on to speak at length about Ali at his namesake center in Louisville’s “Museum Row” the next day. The politician has used his platform as a megaphone for his fellow citizens to discuss what the boxing superstar and civil rights activist meant to them.

Louisville Orchestra conductor Teddy Abrams on what Ali means to him, Louisville and the world. pic.twitter.com/60tWEkxjlx

Makeshift memorials have popped up at the Muhammad Ali Center as well as Ali’s childhood home, recently restored and converted into a museum.

Emotional scene at Muhammad Ali Center in Louisville. Before 9 am, people turning out to pay their respects pic.twitter.com/uVFyfsf32N

Fans are paying tribute to Muhammad Ali outside his childhood home on Grand Avenue. pic.twitter.com/OMCQZSwukw

City institutions all over Louisville have also taken to Twitter to honor the “Greatest,” from the famed Louisville Slugger baseball bat company to the historic Brown Hotel, which named a suite after the champ.

We lost a great. #RIPMuhammadAli

Photo: A drawing he made in a book in the suite dedicated to him at our hotel. pic.twitter.com/sR8V1pbIMk

Today we pause to remember the world’s greatest. #RIPMuhammadAli pic.twitter.com/wdPSY31g89

The fact that both the University of Louisville’s athletic department and its social justice research center were compelled to mark Ali’s passing speaks volumes about the iconoclastic athlete. It’s what inspired the opening of the Muhammad Ali Center in 2005.

The multicultural center spans far more than Ali’s boxing career, turning the abstract concepts of his character into sweeping exhibitions that play on a strong sense of self and core values.

Those looking to honor Ali and help perpetuate his legacy can donate to the Crowdrise Fundraiser set up in his name. The crowdfunding platform personally created the campaign and states that all proceeds will go directly to the Muhammad Ali Center.

A funeral is set for the boxer on Friday, to be held at Louisville’s massive YUM! Center sports arena starting at 2 pm local time. The event will be streamed online via www.alicenter.org. A procession prior to Ali’s funeral will take place that morning.