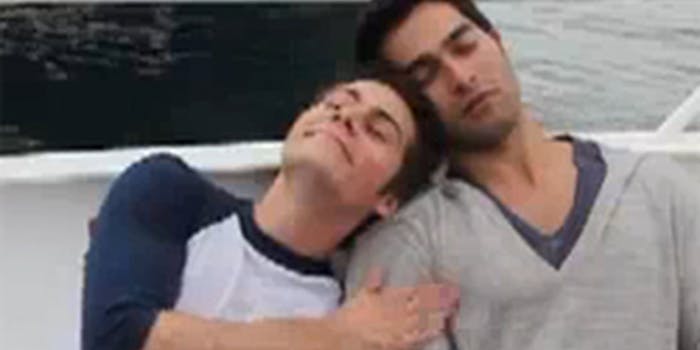 Could a fandom-favored queer pairing become canon by popular demand?

While at first glance it may seem like just another Twilight-inspired teen paranormal romance, MTV’s Teen Wolf is a surprise on numerous fronts, most of all for having what many fans believe to be one of the most progressive examples of sexual politics on any show currently airing.  The show is not without its blatant fanservice, however, and endless shots of shirtless boys and teen makeouts have garnered it a huge fanbase of all ages, and it had an especially good shot at winning best summer show at this year’s Teen Choice Awards, which were handed out last night.

When the time came to give out the main prize, though, the show apparently skipped the entire category, leaving both MTV crew and members of the show’s cast totally confused, and sending fans to Tumblr in waves of outrage. Though Zap2It reported late last night that the show had taken the surfboard in its category, Choice Summer TV Show, the cast actually in attendance at the awards missed the memo.

Ordinarily, this might be just another awards show, but for many Teen Wolf fans, the stakes were much higher than whether or not the show picked up a TCA. During its promos for the categories in which the show was nominated, MTV explicitly courted the huge fanbase for Sterek—Derek/Stiles, a non-canonical slash (queer) relationship that is far and away the fandom’s juggernaut pairing. Tipping its hat to fans who ship the pairing—“shipping” is the universal term for wanting two characters to get together—MTV filmed the actors who play Derek and Stiles literally cuddling on a boat and encouraging fans to vote for the show. The ploy was echoed strongly at Comic Con, where actor Tyler Hoechlin declared there was a 50/50 chance that the pairing could become canon. Many fans felt the implication was clear: If enough fans supported the show at the Teen Choice Awards, they could create a kind of marketing blitz for the pairing they love to become reality.

Teen Wolf is already the first show to ever openly court a slash fanbase, much less use it in marketing materials. And if Sterek does become canon, it would be the first time a non-canonical slash pairing that has ever made its way onto a show purely by virtue of being overwhelmingly popular among viewers.

For fans like saucery on Tumblr, Teen Wolf represents a huge potential milestone for equality in mainstream media.  “I’ve been in many fandoms, over the years,” saucery wrote a week before the TCAs. “[I]n many of them, I’ve been queer-baited, and in many others, my existence as a slash fan wasn’t acknowledged, at all. But this? Is the first time in my entire fannish life, in more than a decade, that I’ve actually felt my slash OTP [one true pairing] might become canon.”

Still other fans feel that hinging Sterek’s success or failure as a representative queer pairing around its popularity is a dangerous thing: One Teen Wolf fan told the Daily Dot anonymously that if Sterek becomes canon purely through pandering to fans, rather than through organically arising on the show, it will create more problems than it solves.

Yet fans’ primary worry last night was not that the queer relationship would be mishandled by MTV, but that Teen Wolf failing to win at the Teen Choice Awards would sink Sterek as a canonical ship before it ever launched. “My whole dash is full of TCA hate and Sterek fandom having a meltdown,” wrote one fan.

As for MTV, they seemed to have a clear idea of the kind of mass-market potential—and the power—that resided in Teen Wolf’s slash fanbase. When questioned about whether TW fans should direct their outrage at the TCA for overlooking the show’s category, the network quipped, “Unleash the beast.”