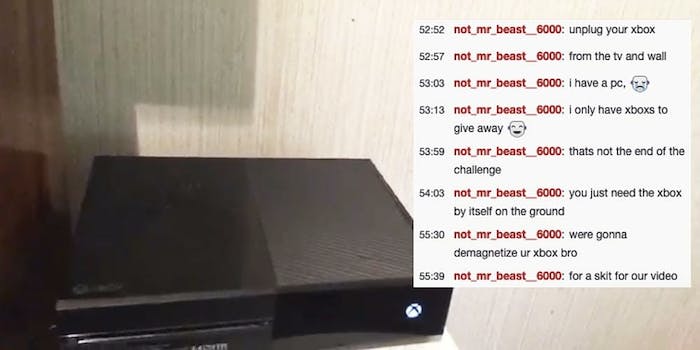 As the saying goes, a fool and his, uh, expensive gaming console are soon parted. That’s precisely what happened to a hapless kid tricked into destroying his Xbox on Twitch by a MrBeast impersonator.

On Sunday evening, Reddit user whatps2 posted to r/LivestreamFail that they had been perusing random streams in the Travel & Outdoor Twitch directory when they came across a stream of a kid obviously being trolled by someone posing as the YouTuber notorious for his charitable stunts.

MrBeast, whose real name is Jimmy Donaldson, had found viral fame through his videos in which he’s seen donating money to Twitch streamers and others in need. The 21-year-old has given away over $1 million to date.

After failing to convince the kid, jaidengggg, to smash his expensive TV, Twitch user “not_mr_beast_6000” was eventually able to dupe him into filling up a cup of water and pouring it directly into his Xbox—with the promise of hefty donations. It certainly didn’t help that others who had joined the chat were egging him on.

The kid then proceeded to immediately freak out and try to remove the water from his Xbox, only to have the other users in the chat goad him into thinking that the unplugged machine was emanating dangerous fumes that could harm and kill him. One user even went so far as to advise him to call 911 and evacuate his family from their home.

Eventually, jaidengggg stopped filming, and although he appeared to be fine, the fate of his Xbox is unknown.

These kinds of stunts are becoming more and more prevalent. Earlier this year, a Twitch streamer was fooled into destroying his $1,200 PC by a troll posing as MrBeast—and his mother even assisted with the stunt.

In this instance, the boy in question seemed to be no older than around 10 years old. Between the stunt itself and some of the other wholly inappropriate remarks that were made over the course of the chat, it seems as if mom and dad may want to step in at this point.

You can view the full stream here.