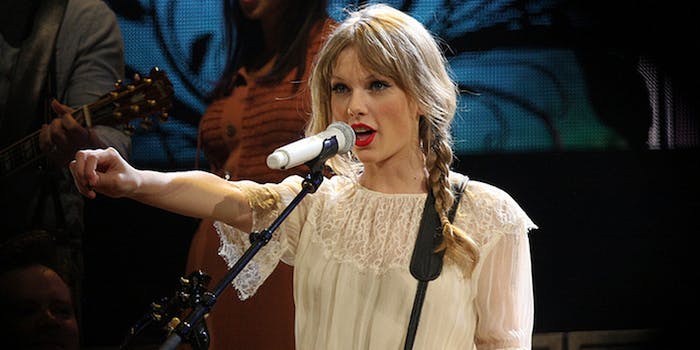 Someone needs to make a SwiftGoats Christmas album happen.

The Mountain Goats have devoted fans. So does Taylor Swift. So what happens when those fandoms overlap?

A Tumblr user named supercherie put together a list of Mountain Goats and Taylor Swift songs that complemented one another, and labeled it a “conceptual mixtape”:

2. no children/we are never ever getting back together

3. you or your memory/all too well

This actually makes sense, as both acts incorporate themes of love and longing into their lyrics. John Darnielle, Mountain Goats’ frontman and keeper of one of the most entertaining accounts on Twitter, took to his Tumblr after reblogging the post:

people were telling me about this on Twitter so I made a mix of it minus You Were Cool because I don’t have any recordings of that* and it’s fun. both artists would be well served by more shredding guitar solos but I am sure they are both working on it. I am attaching a trigger warning to the song “Mean” because it made me cry.

He added that he could probably find a version of “You Were Cool,” but that the song “is for playing in rooms with people in them who are listening while I’m singing in the present moment.”

And then the mix ended up on Rdio, minus “You Were Cool.” It’s actually pretty seamless.

Darnielle is open-minded about the current pop-music landscape: Earlier this year, he defended even Justin Bieber in song. Someone needs to make a SwiftGoats Christmas album happen. Perhaps a role-reversed, feminist recontextualization of “Baby It’s Cold Outside”?