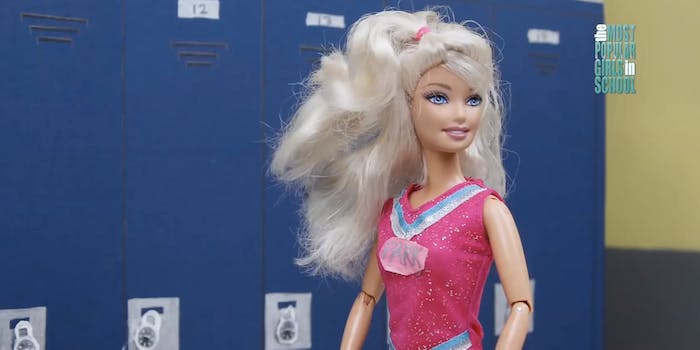 In the ladies’ room with ‘The Most Popular Girls in School’

There’s something dissociative about hearing the voices of vindictive, foul-mouthed cheerleaders coming out of the mouths of grown men.

There’s something dissociative about hearing the voices of vindictive, foul-mouthed cheerleaders coming out of the mouths of grown men, but watching the geniuses behind the YouTube and Tumblr smash webseries The Most Popular Girls in School, it almost seems natural. Almost.

It’s all about high school drama, but with a cast of Barbie dolls and 99-cent knockoffs. The stop-motion animated series’ season 3 premiere airs Tuesday. Here’s everything you need to know.

The show’s pilot revolves around control of the girls’ bathrooms. A head cheerleader named Mackenzie Zales—played by a black-haired dollar-store doll—is pissed to find a new girl, Deandra, a blonde in an ill-fitting ball gown, using the cheer squad’s private pooping station.

Every episode is this absurd, with over-the-top swearing, props straight out of a 1990s high school sitcom, and plots like some demented, Adult Swim–style Daria-meets–Mean Girls crossover parody. There’s also a realness to the way the characters interact, bringing up past events (usually from the third grade) very naturally. They call each other by their first and last names. The show is quotable as hell: “Nobody’s fucking talking about Gossip Girl, Rachel Tice! Why don’t you go eat a roly poly like you did in the goddamn third grade?” 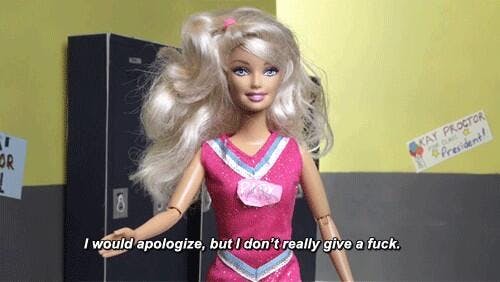 The idea for The Most Popular Girls in School (MPGiS) was taken from a sketch originally titled “Bathroom Hierarchy,” written by L.A. actor Carlo Moss. It was based on an improvised scene and centered on the comedy of the deep, annoying voice Moss said he often used to portray women on stage. Moss performed in drag as Deandra at L.A.’s Improv Olympic theater, and Mark Cope, looking for a new animation project when he saw the sketch, asked for permission to stop-motion animate it. From there, the character of Deandra, the protagonist of the show, was born.

MPGiS soon hit its stride and became a ubiquitous Tumblr meme with the second episode, which introduced the character Brittnay Matthews, voiced by Lily Vonnegut. Brittnay is arguably the show’s most beloved character because she’s incredibly temperamental. She’s blunt; she loves calling out other characters on their shit. In her introduction, she flips out at a French exchange student who overuses the phrase “How you say…” and accuses her of being from Montreal.

Two years ago, a GIF of the Brittnay character’s freakout flooded Tumblr dashboards. It became a go-to reaction GIF—the perfect animation with which to say “You are the worst.” Initially, there was confusion on Tumblr about where it came from. “What the eff is this Barbie show?” one user wrote. Another asked, “Why are there Barbies all over my dash??”

Tumblr is known for its relentless pursuit of fandom, and so it didn’t take long for people to track down the source—a video of a sweet-faced Barbie screaming “It’s a fucking French word, you little bitch!” at a Disney Belle doll. The channel grew to half a million subscribers and changed the careers of Cope, Moss, and Vonnegut (who also serves as the show’s producer).

Fast-forward to today. MPGiS now puts out new videos every Tuesday, has more than 35 million views, and two spin-offs, The Trisha Show and Judy and Red in the Morning. There are more spin-offs coming, more professional lighting and cameras being purchased, and a slew of holiday-themed episodes, including a Halloween special that came out last week. Their online store consistently sells out of MPGiS T-shirts and other goodies. There’s also a Most Popular Girls book deal in the works.

The recording sessions are pretty laid-back. The voice actors have worked together in the L.A. comedy scene for years. It’s basically a case of making something popular and then bringing all your friends on board to enjoy the success. There’s shorthand and familiarity: Some of the actors are middle school friends of Cope’s. Vonnegut and Moss used to date. Others like Lee Newton, Tyler Oakley, and Grace Helbig were brought in from the close-knit YouTube community.

The show’s popularity is mostly thanks to writers Moss and Cope’s comedic timing and flair for the offbeat, but the style of the show is what makes it stick. There’s no shortage of details about even the most ancillary characters, and each boasts unique quirks and a lengthy backstory. The show’s not shy about confronting issues like homosexuality, bodily functions, teen pregnancy, and other tropes of high school CW dramas, but without the forced melodramatics. Oh, and one girl gets her arm replaced by a robot.

Fans cosplay as Brittnay, nerdy Rachel Tice, Deandra, and French student Saison Margueritte in pink cheerleader uniforms or ball gowns. There’s endless fanart and fanfiction (most centered around the femslash pairing of Trisha 1 and Trisha 2, a pair of dopey friends with the same name), tribute videos with fans performing monologues from the show, parodies, and Tumblr pages dedicated to certain characters and couples.

To promote the group’s IndieGogo page for season 3, the cast did a livestream last week that was six hours long. It featured the voice actors answering questions and playing games using quotes from the show, impromptu improvisations with the dolls, and taking requests to give shout-outs in character voices.

The group is trying to raise 20,000 dollars and have 5,000 to go with a week left. Prizes include signed T-shirts, first drafts of never-before-seen scripts, and having a character named after you.

Seeing the real faces behind the voices was hilarious. Lots of the female characters are voiced by scruffy, bearded dudes. When in character, they change their faces and tilt their heads, trying to imitate the dolls.

In the chat and on Twitter, the livestream’s flow of viewers asked so many questions, so quickly that it was hard for the cast to keep up. Cope led most of it, while Moss ran back and forth taking care of props behind the scenes and appearing on camera for chunks of time. Vonnegut showed off her pregnant belly but declined to tell fans the name she has picked out for her future son. Many asked if she’d name him after a fan or an MPGiS character. No dice.

Vonnegut’s father was the late writer Kurt Vonnegut, and in the chat, she gave book recommendations to the mostly teenage crowd. A lot of the show’s young fanbase had never heard of him, or if they had, it was an essay they’d read in school and then immediately related to “Lily from MPGiS.”

With the start of the show’s third season, MPGiS goes from a small-town operation to decidedly professional production. The quality of the videos is growing with the fanbase. The guest stars are more famous, the storylines are more intricate and dramatic. In fact, a cliffhanger set up in the very first episode is somewhat revealed in today’s premiere.

It’s almost like Moss, Cope, and Vonnegut planned to be the Most Popular Girls on YouTube all along.