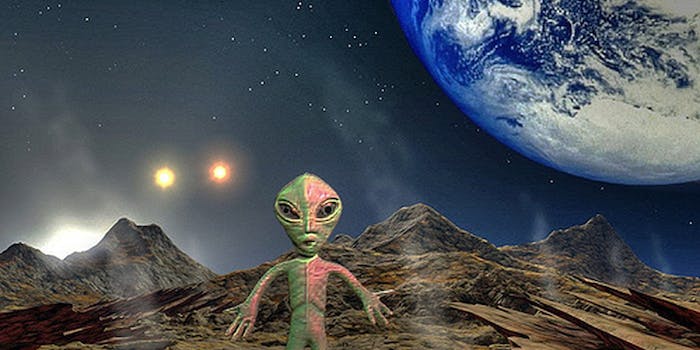 Moses went to Japan in a spaceship

Internet lore has it that Moses (white beard, loved the Ten Commandments) really fled to Japan in a spaceship after he was done with the Israelites.

There’s an old joke (probably first told by a woman, though nobody knows for sure) which goes like this: “Why did Moses and the Israelites spend 40 years wandering through the wilderness? Because Moses was a man, and men never ask for directions!”

Yet a handful of Japanese theologians-cum-tourist-trap operators have a different theory about Moses’ ultimate fate: he went to Japan and gave locals Ten extra Commandments (different from the traditional Ten Commandments he gave the Israelites on the other side of Asia), then lived for another five centuries. After he died, his body was buried on Mount Houdatsu, where his tomb remains to this day.

Cyriaque Lamar brought this theory to the Internet’s notice by writing about it for io9 this week.
The “Moses on Mount Houdatsu” story isn’t the first attempt to create a Japanese connection to Old Testament tales. Any student of the Old Testament knows about the Lost Tribes of Israel, ten tribes mentioned in the early Hebrew Scriptures, though their names vanished from the Biblical narratives after the Assyrians invaded their lands.

So what happened to the people of the lost tribes? The simplest explanation is that they assimilated and blended in with their Assyrian conquerors. But throughout Jewish and Christian history, there have been legends and speculations that the tribes retained their Hebrew/Jewish identity by migrating to other parts of the world: Zimbabwe, India, even the Americas. Other stories have the lost tribes wandering as far east as Japan.

However, the “Moses on Mount Houdatsu” story contains one awesome detail tragically absent from the other legends: a giant spaceship. That’s how Moses allegedly got to Japan.

It looks like people on Twitter aren’t taking this theory seriously as all.  Twitter users  Ferwen and Moonbootica, for instance, both dismissed it as “pseudoscience.” But another Twitter user added: “To be fair, the Mormons did it first.”

(Mormon doctrine picks up the story of Jesus where traditional Christianity ends it: After Jesus was crucified and rose from the dead, he came to North America and preached the gospel to the American Indian population, who in turn descended from one of the lost tribes of Israel.)

Az7stars’ take on the matter is a little more difficult to parse:”Bug Japan&allJapaneses’re only the devil Moses’d teached people clearly then yet.”

But Toranosukev’s response should warm the heart of any Japanese travel agent trying to sell pilgrimage packages to the Tomb of Moses on Mount Houdatsu: “Moses flew to Japan on a spaceship and is buried in Ishikawa-ken. I want to visit, of course.”