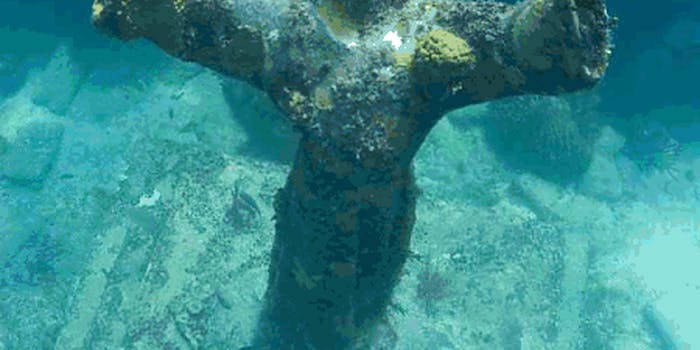 And Jesus said, “My Kingdom is not an earthly kingdom,” but we’re not sure this is what he meant by that.

Christ of the Abyss is, despite the nomenclature, not a theistic response to Nietzsche; it’s an 8 1/2 foot bronze statue of Jesus submerged in the waters off the coast of Italy. Modeled after Italian swimmer and diver Guido Galletti, the original was a memorial to Dario Gonzatti, the first Italian to use scuba gear. But, as God is supposed to be everywhere, so Christ of the Abyss is everywhere, or nearly: There’s another cast of the statue off the coast of St. George’s, Grenada, and the most popular iteration is off Key Largo, in the Florida Keys, where it is a destination for both underwater photography and burials at sea.

God only knows how many Aqua Jesuses are trapped in souvenir snow globes around the world.

The Morning GIF for today is a wavily animated, 3-D representation of that Key Largo statue. It was sent to us by Ubeo, the creator, and has had 1722 notes on Tumblr so far. Ubeo calls his GIFs “360 degree wigglegrams – or ‘gyrographs’ as I have named them. It’s an effect that seems to work VERY well with underwater photos, and I plan on doing many more.”