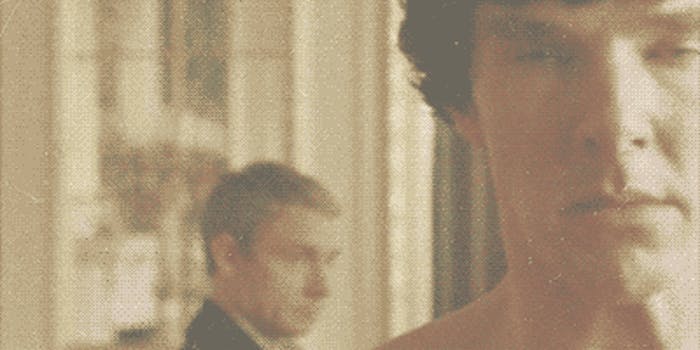 Sherlock makes it incredibly difficult for John to get women.

It’s fine. Look, we’ve all been there. An involuntary glance in an indelicate situation and BAM! Suddenly you’re questioning your entire sexuality.

Okay, maybe we haven’t been there exactly.

John Watson, involuntary guest at Buckingham Palace, can’t keep his eyes from wandering toward the full moon, Sherlock having willfully neglected to bring both trousers and underwear (“pants”) before setting forth to meet his monarch. Just a typical weekday for the boys from 221B Baker Street—and a scene from “A Scandal in Belgravia,” the first episode of the second season of the BBC smash hit Sherlock.

Look, it’s hard enough for a single, impecunious military doctor invalided home from Afghanistan to pick up chicks. How much more difficult is it when burdened with a landlady that whispers about “if you’ll be needing two rooms” behind the back of her hand, and a steadily growing legion of women willing to swear you’re more devoted to your roommate than to any of them? Nevermind that cunningly whispering air of self-doubt running through your life lately.

As if John Watson needed this, let alone the 10,709 witnesses on Tumblr.

And how was your morning?