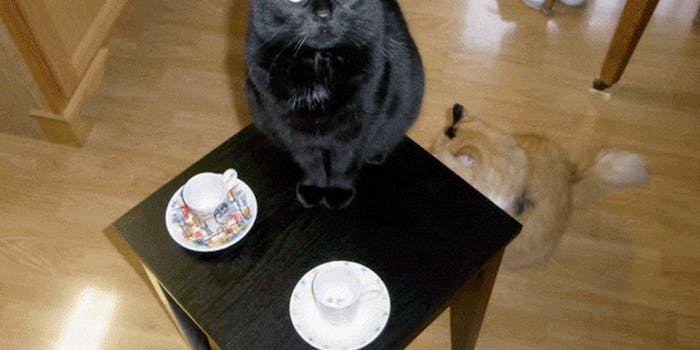 I taught my mom to make GIFs—and this happened

I figured that if my cat-loving parents knew how to GIF, they would rule the Internet. So I taught them. And within 48 hours, they sent me back the (amazing) results you'll see below.

As the legend goes, Microsoft CEO Steve Ballmer consulted his own mother before the launch of Windows 95, asking her to test out the operating system before its release. (It worked fine, she told her son, but putting the power-off function in the Start menu made no sense.)

Ballmer had the right idea, but possibly for the wrong reasons. The implications of the “mom test” are that if a woman in her 50s or 60s can use a tool, anyone can—but that’s kind of sexist and kind of ageist, and it relies on the assumption that our parents, to quote the Fresh Prince, just don’t understand.

Maybe my situation is unusual, but my parents certainly do understand. It hurts to admit it, but they’re actually way better at the Internet than I am. They were first on the block to own a modem and a 32-megabyte hard drive. They’ve taught me all I know about the Web’s essential building blocks: Apple products, correct grammar, atheism, hippie politics, foodporn, and cats. They’re brilliantly demented writers, video producers, and artists.

If they knew how to make GIFs, they would rule the Internet. So I taught them how to do it. And within 48 hours, they sent me back the (absolutely amazing) results you’ll see below.

But first, let’s back up for a minute. If you’re unfamiliar with the Graphics Interchange Format, there are a few things you should know.

The GIF is the muggle version of Harry Potter‘s magical moving photographs. It’s a type of animated picture, first developed by Compuserve in 1987. It’s pronounced “jiff,” like the peanut butter, as in “choosy developers choose GIF” (but “giff,” with a hard G, is OK too). It’s way more fun than a still picture, but way less of a time commitment than a YouTube video.

This year, the GIF emerged as an essential tool for sports and political journalists; it was ubiquitous in Olympics and election coverage on every media channel except Fox News. It was voted the Oxford English Dictionary’s Word of the Year. There are legitimate art museums hosting GIF exhibits (seriously).

The format is hugely popular because now there are a ton of Web apps, such as Mothereffing Animated GIF, you can use to make one. On a smartphone, there’s GIFBoom, LoopCam, and Cinemagram.

My parents don’t have iPhones because, unlike me, they spend money wisely, so I taught them these few steps on Photoshop, which is the only serious choice for GIF purists anyway. Go big or go home.

So then this happened, just two days after I called with this story idea. They’re nothing if not punctual. I didn’t expect the cats to take such a prominent role so early in their GIF careers, but obviously the ‘rents have done their research.

My parents have two surrogate children—i.e., cats—named Tilly and Simon. For her first GIF assignment, my mom threw them a tea party. She took still pictures, imported them into iPhoto, exported them as a slideshow and GIF’d that. It’s cute, but not quite Internet-ready.

Mom makes Simon (the black one) do tricks on his hind legs before he gets a bowl of milk. For some reason, she doesn’t hold Tilly (the orange one) to the same high standards. It’s important to note here that milk time is the only way the cats will hang out together. Also that my dad is a pretty stable cameraman.

“Don’t You Want Some Belly to Rub?”

Every morning, Tilly comes in my mom’s office for a belly rub. Mom sings to her, “Don’t you want some belly to rub?” to the tune of the Jefferson Airplane song “Somebody to Love.” The GIF is a little fast and choppy, but this is clearly the best one. It’s almost a seamless loop, and there’s just so. much. cat.

Keep going, guys. This is a great start.

My parents are obviously well on their way to Internet domination. Next, I’ll show them how to make a parody Twitter and pare an essay down to 20 pictures overlaid with Gotham text. I might even show them Reddit.

Photo courtesy of the author’s mom.